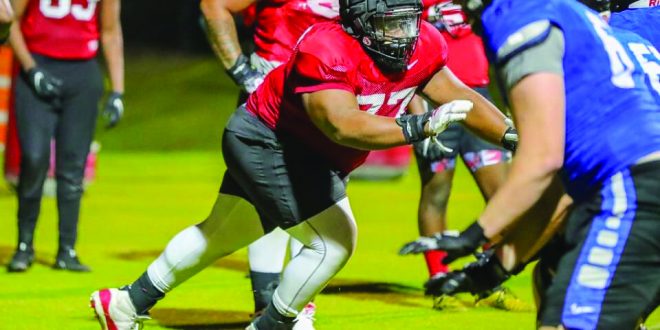 Coming from humble beginnings, senior defensive lineman Corey Brown Jr. knows that he must make the most of the opportunities he’s given.

He is doing just that.

Brown was born in Washington D.C. and was raised by his mother, Dorothy. Brown also received guidance from his godfather, Sean Washington.

“I came from a tough background,” Brown said.

Brown’s collegiate career has been that of a journeyman. After spending two seasons at Arizona Western Junior College, Brown transferred to Central Oklahoma in 2019 before transferring to VSU last year.

Unfortunately for him, Brown’s initial senior year was wiped out due to COVID-19.

Now, Brown is a fifth-year senior and taking advantage of the biggest wave to ever hit college athletics: last June’s NIL rule change.

NIL (Name Image and Likeness) has been a hot topic in college sports for decades. Since the beginning of the NCAA, it was against the rules for college players to receive benefits for their likeness, including autographs, photo ops and advertising.

Then, a landmark decision was agreed upon by members of the NCAA.

Beginning on July 1, 2020, all college athletes were now allowed to sign deals and make money off their name, image and likeness.

“I think it’s a beautiful thing,” Brown said. “It gives players the chance to have some extra money in their pockets. I get to have deals with brands that help set me up for the next level.”

Brown is just one of many athletes to take advantage of the new rule. Notable college players to sign NIL deals include Georgia’s JT Daniels, Alabama’s Bryce Young and Ohio State’s Quinn Ewers.

Brown has been offered several deals.

“Ball Out Culture reached out to me through social media,” Brown said. “It was right around the deadline period on July 1. They sent me some of their merchandise to try out. I think, including them, I have nine deals.”

Brown is the first of many current and future VSU players who will have the chance to capitalize on their likeness.

Brown plans on giving some of his earnings back to his family as well as to his hometown Boys and Girls Club, which he said needs money for better sports equipment.

“I just want to give back to the people who helped me become who I am now,” Brown said.

Previous The Yik Yak Comeback
Next Editorial: You are stronger than you realize