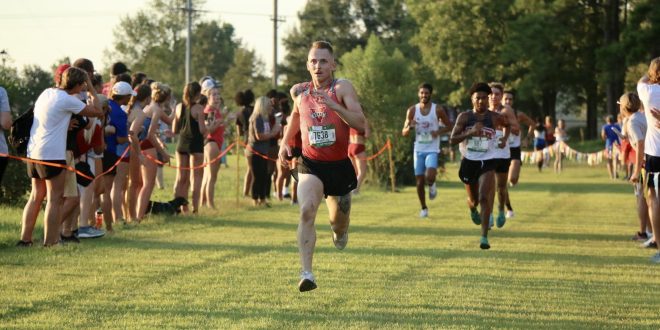 The race was hosted by Saint Leo University. The men’s race was an 8k, or roughly five miles, and the women’s course was a 6k, or just over 3.5 miles.

The meet boasted some of the top teams in the country. These teams include Wingate, Fresno Pacific, Mount Olive and many others.

Head coach Todd Smoot said there were no changes in preparation for this meet.

“The team’s workout load has been building and will continue to build through the 17th,” Smoot said.

On the men’s side, the Blazers were led by Junior Brishen House. House said he has a very specific routine to get prepared for each race.

“The week of a race I do the well-known practices of high-performance: hydrate, eat and sleep right,” House said. “The morning of a race, I don’t usually listen to music, talk much to those around me or eat anything until after the race. I visualize each kilometer, how I’m going to feel and what I’m going to do to deal with the pain.”

The Lady Blazer’s front runner was senior Angie Cipriani. She said she tried not to put a lot of stress on a time since the runners have the chance to run the race more than once if they qualify for nationals.

“Expectation-wise, I wanted to run a competitive race and focus on beating out people in our region,” Cipriani said.

Conditions at the meet were worse than Smoot would like for the runners; however, he said that there were still great performances in the conditions.

“On the men’s team, four earned faster times on a course and in conditions that were harder than experienced at FSU on the 17th,” Smoot said.”One of our freshmen earned a PR–Alec Munger by 62 seconds.”

According to Smoot, the lady’s team had four runners earn faster times as well. The two freshmen that earned PR’s were Caitlyn Koske and Kiley Matheson.

The Blazers will travel to Charlotte, NC to run in the Royals Challenge at McAlpine Creek Park on Friday, Oct. 8. The women will race at 4:30 p.m. and the men will race at 5:20 p.m.