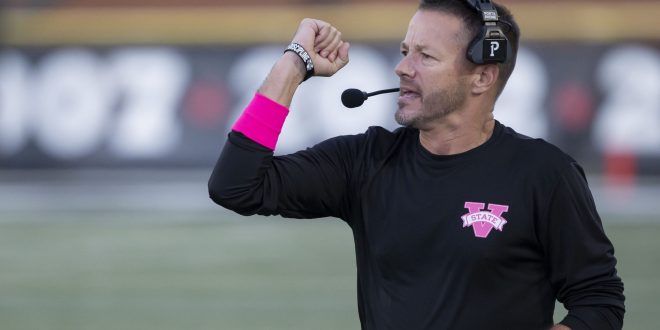 In the wake of the raucous week, which saw seven of the top 10 teams lose including both top two teams, VSU moved up to No. 2. The Blazers will be back on the road when they face Mississippi College (3-3, 2-2 GSC) on Oct. 23.

For the first time all season, VSU trailed as West Alabama got off to an early 14-0 lead.

“We had a call not go our way early on,” head coach Gary Goff said. “We had an interception in the end zone that didn’t get called, but our guys didn’t flinch at all.”

Even with the early setbacks, VSU got the passing game going as junior quarterback Ivory Durham found senior wide receiver Lio’undre Gallimore for a 46-yard touchdown. Redshirt junior running back Jamar Thompkins tied things up with an 18-yard run.

One of Durham’s go-to targets, graduate student wide receiver Brian Saunds, had a huge day, catching nine passes with 168 yards and a touchdown. Saunds was named GSC Co-Offensive Player of the Week for his efforts.

While the record doesn’t show it, Mississippi College will be another tough opponent for VSU.

“What they do offensively and defensively is very difficult to defend and score on,” Goff said. “We got our hands full, but we talked as a team first thing Monday morning about ‘Let’s not buy into this ranking’ stuff. It doesn’t really mean anything right now.”

“They run the triple option from under center, so it’s more assignment sound football,” Goff said. “If one person misses an assignment, the ball could go for 80 yards. It’s a very hard offense to simulate in practice. I think we have a very good game plan, and I expect us to go out and execute that game plan and play extremely hard.”

Apart from the triple option offense causing headaches for defenders with three runners in the backfield, it is also run at a much slower place.

“In 2019, they’d run a play and let the play clock run all the way down to about two or three seconds and snap the ball again,” Goff said. “It was a little odd. Our defensive players are just standing there like, ‘What do we do with all this spare time?’ I imagine that they’re going to do the same thing, and that means on offense that we got to sustain drives and end every drive with points.”

Previous Letter to the Editor: Team Names Offensive to Native Americans
Next Pull a Kell(e)y and just go for it