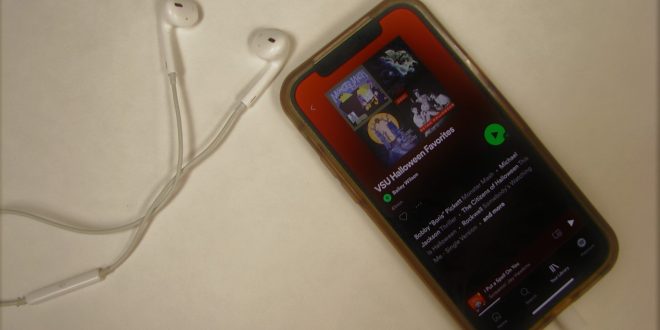 It’s autumn here at VSU, and as the days grow shorter and the air gets colder, students and staff alike are anticipating the arrival of Halloween.

But what is Halloween without the right environment? Sure, pumpkin patches are a great way to celebrate. Costumes are always fun, and everyone loves the candy. But what truly makes the atmosphere is the music.

Halloween songs have become staples of the season, so much so that we can’t picture the season without them. With this in mind, here are the top 10 songs for your Halloween playlist.

“Monster Mash” by Bobby “Boris” Pickett & The Crypt Kickers. Considered the hallmark of the season, this song is a child-friendly classic that everyone can sing along to.

“Thriller” by Michael Jackson. Just as iconic as Monster Mash, “Thriller” graces radio stations much more frequently due to its status as the most prolific Halloween pop song. Even if you don’t like Halloween, you’re likely to sing along.

“This Is Halloween” by Marilyn Manson from the “Nightmare Before Christmas” soundtrack. Hailing from one of the most iconic movies for the season, this song best represents the movies that come from Halloween.

“Somebody’s Watching Me” by Rockwell. With lyrics that tell a story of a paranoid man, this song is just as creepy as it is genius. Especially with the inclusion of Michael Jackson, it has become essential in any Halloween playlist.

“Superstition” by the iconic Stevie Wonder. This song encapsulates the soul of the season without ever leaving its genre, and it continues to live on as a warning to those who believe in things they don’t understand.

“Season of The Witch” by Donovan. Another witchy song, though the genre is mostly different from the rest. A classic rock song that fits well with the holiday.

The “Ghostbusters” theme song by Ray Parker Jr.. Another iconic movie, this song is sure to invoke both the decade in which it was made and the spirit of Halloween.

“Time Warp” from the “Rocky Horror Picture Show. Less targeted for Halloween, but still is nearly inseparable from the holiday. This song is as danceable as it is spooky.

“Weird Science” by Oingo Bingo. Our last song on the list describes a mad scientist and his wacky endeavors into his experiments. A song everyone can sing along to.

Previous ‘Squid Game’: Fun and games, but at what cost?
Next Collegiate Women promotes the Wellbeing of Women