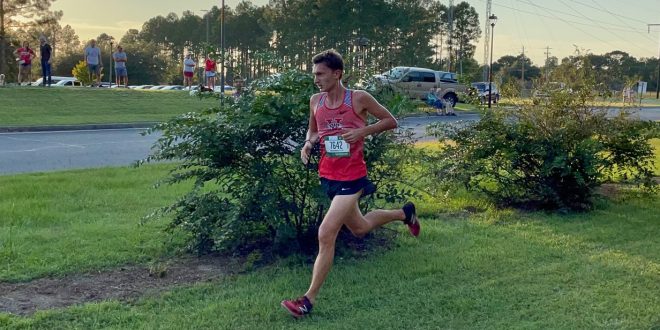 Cross country is no easy feat. It requires strength, endurance and determination. These are just a few of the traits that Alec Munger, a first-year nursing major and cross country runner here at VSU, incorporates into not just his races but everyday life.

Born in Chambersburg, Pennsylvania, Munger has been an avid runner all his life. As a kid, he and his family moved to Valdosta. Once he graduated from Lowndes High School, he brought his talents here to VSU.

Munger first began running cross country as a freshman in high school, although his mother is the one who fueled his “speed and passion for the sport” from an even younger age.

With five full cross country seasons under his belt, Munger’s reasons for participating in the sport are the relationships he builds with his team and the feeling he gets from setting personal records.

“The team becomes like brothers and sisters to each other, and I love being part of this family,” he said. “And the feeling I get when I earn a new personal record is an indescribable and amazing feeling that I can’t get anywhere else.”

As with any sport, sometimes there are challenges and downfalls. To overcome the obstacles that can arise when running cross country, Munger simply reminds himself that cross country is a team sport, and he doesn’t want to let anyone down.

“When I’m really hurting during races, I try to think of my teammates and how they are depending on me to do my best,” he said.

Through the ups and downs, Munger has had the time of his life participating in cross country over the years. He says that his all-time favorite memory in the sport is from the Queens meet this year.

“It was super rainy and muddy during our race, but the team persevered, and I ran my fastest collegiate race to this day,” he said. “In fact, I think every guy on the team PR’ed [personal record] that day.”

Being a collegiate athlete requires a strong support system, and Munger says he’s got the best of the best. Although his family and friends as a collective group are supportive of him, Alec says his biggest supporter is his mom.

“She was a runner growing up just like me, and that gives us a special connection that can’t be replicated,” he said. “She’s always cheering me on whether I’m having a good race or not.”

In the future, Munger hopes to continue being the best teammate and runner he can be for his team.

Academically, he hopes to graduate with his bachelor’s degree with good grades and get into the M.S. in Nursing program.