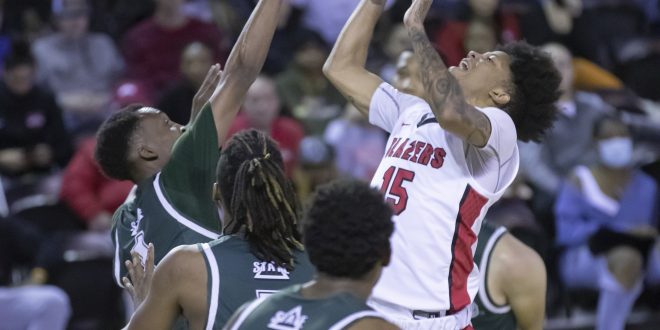 The VSU men’s basketball team rebounded from a tough loss against West Florida with two comeback home wins on Hall of Fame weekend to move to 9-7 on the season.

“To win on Hall of Fame weekend is always important,” Mike Helfer, the men’s basketball head coach, said. “It’s a great weekend for our athletic department and for everybody who gets to go into the Hall of Fame.”

In their first game against Delta State, the Blazers started out sluggish on offense, allowing for the Statesmen to build an early 22-11 lead.

Steadily, the Blazers battled their way back to make it a 40-33 game at halftime. This was despite the fact that the Blazers went just 3-14 (21.4%) from the three-point line in the half.

In the second half, the offense caught a head of steam and outscored Delta State 46-26 over the final 20 minutes. Meanwhile, the defense smothered the Statesmen, holding them to just 11-33 (33%) from the field.

Four Blazers finished the game with double figures, including redshirt junior guard Cam Hamilton, who scored 18 points on 7-13 shooting and 4-6 from three.

Against Mississippi College, the Blazers again started out slow, committing 7 turnovers in the first eight minutes of the game. Junior guard Jacolbey Owens accredited the early mistakes to the speed that VSU plays at.

Still, the Blazers again found themselves trailing by double digits as the Chocktaws built a 22-10 lead. The Blazers tightened up on defense and went on a 10-2 run to close the gap.

The game then went back and forth, as the Chocktaws would answer a VSU basket with one of their own. Two big three’s on consecutive possessions made it a 36-35 game at halftime.

“The three-point line changes the game because the momentum when you make them, not only are you getting three points, but it can also get a home crowd going, and it got our crowd going today as we made threes.,” Helfer said. “I think you’ve got to be careful because you can’t fall in love with it, but when you are making them and taking good threes, it can really change the game in a positive way.”

The momentum gained late in the first half carried over into the second half as the Blazers went on a 12-1 run to open the half and build a 47-36 lead.

VSU’s speed and depth finally wore down the Chocktaw defense in the second half as the fast pace forced them to move into a full court press defense.

Still, the Blazers found holes in the coverage and converted easy baskets to keep themselves in front.

“We talked about it because of the way they press, we thought that the diagonal deep pass would be there and it was there the entire game,” Helfer said. “The times we hit it, we scored layups because it was so open.”

VSU closed out the game with authority, hitting a dagger three and following it up with a dunk to finish off Mississippi College.

Five Blazers finished the game in double digits, with Hamilton once again leading the charge with 18 points on 6-13 shooting and 4-7 from three. Owens also recorded a double-double for the game, scoring 12 points while also having 11 assists.

The Blazers will be back in action on Jan. 20 when they travel to Memphis, Tennessee, to face Christian Brothers.