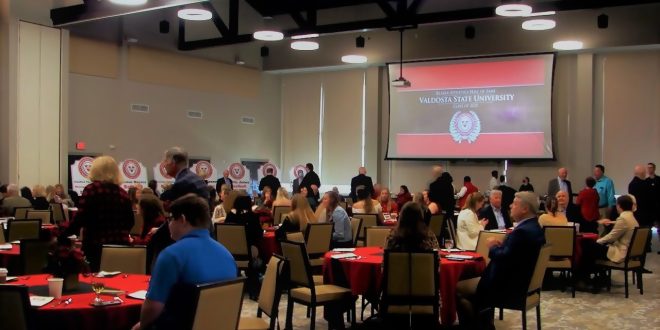 VSU inducted seven new members into the Athletic Hall of Fame on Jan. 15 as part of the 25th annual ceremony.

Dr. Robert Bob Smith, the Provost and Vice President of Academic Affairs, took time to recognize VSU’s success on and off the field.

While not everyone was able to attend in person, the inductees gave heartfelt speeches about their time here at VSU.

Jones, a wide receiver from 2006-2009, set a Gulf South Conference record with 282 catches over his career. He also scored 20 touchdowns, putting him in the top 10 in VSU history. Those honors allowed him to be recognized as a member of the 2000-2009 GSC all-decade team.

Bryant, who played from 2002-2006, became an offensive juggernaut during her time as a Blazer, scoring 1,389 points in her career and putting her among just 12 players who scored 1,300 points in their careers.

“Candice was about as steady as they come,” Herb Reinhard, VSU Athletic Director, said. “Just about every time she walked on the floor, you can write down in the scorebook 12-15 points and 6-8 rebounds.”

Bryant shared a touching story during her induction speech, being thankful to just be at the ceremony.

“I want to thank Jesus Christ for being able to just be here this morning,” Bryant said. “I was at work, and I fell. I was dead for eight minutes and was in a coma for three days, so it’s an honor to be here.”

Kugbila was an all-American offensive lineman during his time at VSU from 2009-2012. Following a stellar senior campaign that was capped with VSU’s third football national championship, Kugbila was selected 109th overall by the Carolina Panthers, becoming the highest drafted player in VSU history.

Kugbila, whose family is originally from Ghana, is grateful for the opportunities brought to him when he and his family moved to America.

Durante was a force on the tennis court when she was at VSU from 2007-2010. During her time at VSU, she was named to the all-GSC team in each of her four seasons and earned all-decade honors.

Tennis head coach, John Hansen, who has previously been inducted into the VSU Hall of Fame, gave remarks on her behalf.

“She was probably the most competitive girl I’ve ever seen,” Hansen said. “We’ll use the term ‘possessed’. She was somebody who wouldn’t say two words for two weeks of practice was suddenly like ‘This girl is mine. She has something I want to take.’”

Carter was a star slugger for the VSU softball team from 2012-2015, rewriting the GSC record books in setting 28 conference records. She also won two GSC Commissioner’s trophies, the highest individual award that the conference gives, in consecutive seasons. Her accomplishments earned her 2011-2020 GSC all-decade honors.

“There were ties of doubt when I struck out on a pitch that hit me in my very first college at bat,” Carter said. “There was doubt in that moment when I was at shortstop in my sophomore year of college, and then there was doubt in the national championship game. But the faith of my family, my coaches, my fans and my teammates never wavered, living into this accomplishment tonight.”

Chason has been bringing play-by-play radio calls to Blazer nation for over 30 years. In addition to calling basketball games, Chason also called football games from 1992-1997.

On top of his accomplishments as a contributor to VSU athletics, Chason will also be inducted into the ABAC Hall of Fame in the near future.

“He has conducted numerous interviews, travelled countless miles and shared endless special moments with his unmistakable and enthusiastic narrative thoughts,” Reinhard said. “We have been truly blessed over the years.”

Macera has been the VSU softball head coach since 2006, racking up a national championship and five NCAA regional championships. He has also won 699 games, placing him third among the top winning coaches in the country and giving him more wins than every other VSU softball coach combined.

Under his watch, VSU became the only program in GSC history to send a team to the national championship tournament in three straight seasons, doing so from 2012-2014. However, his top accomplishment might just be him leading the Blazers to six consecutive conference championships.

“There’s multiple teams in the GSC that will make a run at a national championship every year, and to win six consecutive conference championships in the GSC is impressive,” Reinhard said. “It probably will never be done again.”

In his speech, Macera thanked the administration for giving him a chance to lead the Lady Blazers.

Following the speeches, Reinhard officially inducted the newest members into the Hall of Fame.

“Because you brought honor yourselves into this university by virtue of your outstanding accomplishments, it is my great pleasure to officially adopt each of you into the Valdosta State University Athletic Hall of Fame,” Reinhard said.