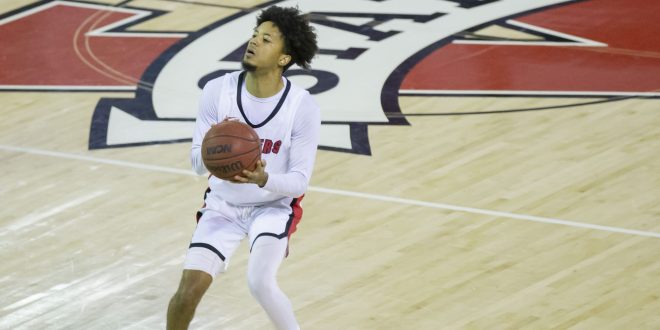 The Blazers had a fast start, making six of their first eight shots, including three 3-pointers, to build an early 15-6 lead. However, a 17-0 run by the Argonauts swung all momentum in their favor.

It wasn’t until a basket by junior, Mohamed Fofana, that VSU put a stop to the bleeding, but by that point, West Florida had a 23-17 lead.

The game then went back and forth, with VSU’s attempts to retake the lead being thwarted by answers from West Florida on their own end. West Florida went into the break with a 40-37 lead.

Despite shooting 12-34 from the field and 3-14 from 3-point range, the Blazers were able to hang around thanks in large part to the free throw line. VSU shot 10-14 from the line in the first half, taking advantage of fouls by the Argonauts.

Following the game, head coach Mike Helfer was pleased with his team’s improvement at the free throw line.

“Yeah, we’ve struggled with free throw shooting the entire year,” Helfer said. “So, we’re just gonna keep working on it. Keep trying to get better and see if we can make some more, but I was happy today that we made enough to win

The game continued to be a tussle, with VSU grabbing their first lead early on in the second half with a basket by Fofana. West Florida responded by retaking the lead with a 7-2 run to take a 47-44 lead.

For the next several minutes, the Blazers and the Argonauts traded blows in an attempt to grab the lead. That’s when junior, Jacolbey Owens, came up big with two big baskets including a steal and a fast break basket.

Those big baskets gave VSU a lead that they would not relinquish the rest of the way. The Blazers were able to build up a 79-72 lead with under two minutes left in the game.

West Florida did mount a late comeback, drawing even with the Blazers at 81 apiece with just seven seconds left.

Just as the game looked like it was heading to overtime, however, a crucial foul on West Florida was called, sending sophomore Cam Selders to the line. Selders knocked down both free throws.

West Florida’s last gasp to win the game was all for naught, as their inbounds pass deep down the sideline floated out of bounds. Their 17th turnover of the game was the final nail in the coffin for the Argonauts.

“I think they just threw that deep trying to get him the ball and just overthrew it,” Helfer said. “So, you know, that was a self-imposed turnover. But I thought we did a good job pressuring the ball. Like we pressured the ball the entire night. And I think that’s what forced him into 17 turnovers.”

For the game, Owens and Fofana both led the Blazers with 18 points, with Fofana coming off the bench.

“I feel like we have seven or eight guys that could start every night,” Helfer said. “For [Fofana] to come off the bench and give us that kind of production was really big, and it was really good for our team.”

The Blazers will be back at home for a pair of games, hosting Alabama Huntsville on Feb. 3 at 8 p.m. and facing West Alabama on Feb. 5 at 4 p.m.