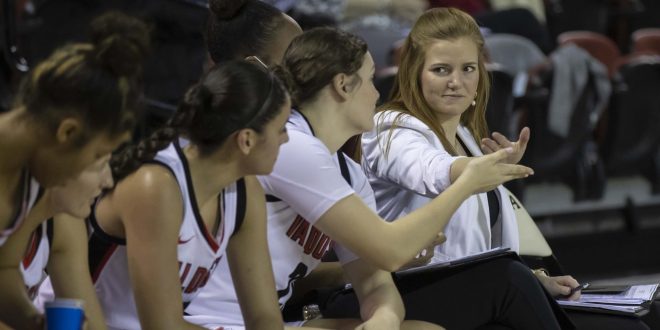 The Argonauts are no pushovers though. They’re led by two of the best players in the conference in Jaclyn Jarnot and Zoe Piller. The two forwards average 16 points and 13 rebounds and 16 points and nine rebounds respectively.

Because of those players inside presences, as a team the Argonauts pound the glass, leading the GSC in rebounds per game at 41. They also draw a lot of fouls from getting the ball in the paint so much – they’re third in fouls drawn, as well as being fifth in overall scoring.

Lastly, they had a chance coming into the game to overtake VSU in the conference standings with a win. Graduate student center Kwajelin Farrar would have none of that.

The 6-1 Farrar flipped in shot after shot on her way to 22 points in just 17 minutes Saturday afternoon. She’s averaging 19.5 points per game over her last three games, and 14.7 on the season, tenth in the GSC.

Farrar and her frontcourt mate, graduate student, Mallory Odell, did great work keeping the Argonauts’ bigs mostly off the glass. Odell’s 14 boards were five more than Jarnot and Piller combined for, as the Lady Blazers held the Argonauts’ stars to only 12-3 and 9-6 respectively.

The Lady Blazers held the top rebounding team in the GSC to only 25 rebounds, a full 16 rebounds under their season average.

The Lady Blazers also held a massive 46-12 scoring advantage in points in the paint Saturday against one of the most interior focused teams in the league. The Argonauts are tenth in the conference in 3-point percentage, shooting only 30%.

The Argonauts never led, though they kept it close in the first quarter behind 13 combined points from Jarnot and Piller.

But Farrar single-handedly blew the game open by going on an individual 10-0 run against the Argonauts that lasted the first four minutes of the second quarter. A 13-19 first quarter lead had ballooned to 13-29 with the Lady Blazers aggressively looking for Farrar inside, and she repeatedly paid it off.

Those were the first points for Farrar since she cored the Lady Blazers’ first six of the game.

The Blazers defense was also at it’s best this quarter, where they forced seven of the 15 turnovers for the Argonauts this game, while allowing only seven points.

After Farrar was subbed out with six minutes remaining in the half, points became harder for the Lady Blazers to come by, however, they still outscored the Argonauts 17-7 and went into halftime up 36-20.

Late in the third, the Lady Blazers’ lead would swell to 40 off a 3-pointer from sophomore guard Tamiya Francis. Francis was second on the team with 20 points. She, like Farrar, was very efficient as well, going 7-10, and 4-6 from deep.

While the Lady Blazers bench got cold from deep in the final quarter the Argonauts were able to close the gap a little bit, ending the game down 27 instead of 40.

Jarnot lead the Argonauts with 12 points, and Piller led with six boards.

Farrar’s 22 on 10 for 13 shooting led the Lady Blazers in scoring, with Francis, Delaney Bernard, and India Jordan being the others in double figures.

Bernard scored 10, and her five assists tied with Francis for the tops on the team. India also added 10 points.