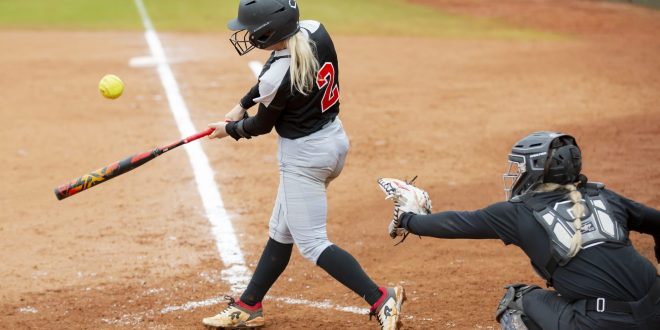 The VSU softball team suffered their first losses of the season in Daytona Beach, Florida, going 2-2 in the Embry Riddle Tournament, which was held on Feb. 11 and 12.

The Embry Riddle Tournament comes on the heels of the Gulf Shores Invitational, where the Lady Blazers went 4-0 over two days, including two wins over top five teams. Their fifth game of the invitational, a showdown with Nova Southeastern, was cancelled due to rain.

These tournaments are part of a tough schedule to start the season.

“We try to play a hard schedule,” Thomas Macera, head coach, said. “We’re used to playing tough schedules throughout the year. We don’t want to play the weaker teams. You want to know where you stand.”

The Lady Blazers’ winning ways followed them from Gulf Shores into this tournament, where they beat Embry-Riddle 9-2.

The game started off slow for both sides, with neither team finding home plate in the first four innings. Embry-Riddle and VSU combined for a total four hits and 11 runners left on base before the fifth inning.

That’s when junior outfielder Abby Sulte gave the Lady Blazers a huge boost in the form of a two-run home run, breaking the scoreless tie at the top of the fifth inning. Sophomore infielder Aniston Gano then found home base following a double by fellow sophomore infielder Taylor Macera.

The Lady Blazers piled on six more runs in the sixth and seventh innings.

Defensively, junior pitcher Samantha Richards shut down any chance of an Eagles rally, giving up only two hits and two runs in the final three innings. The performance was a continuation of strong start for Richards, who recorded a no-hitter during the Gulf Shores Invitational.

Against Tampa, things were a much different tune. The Lady Blazers were unable to find much success on offense in both games against the Lady Spartans, scoring a total of just three runs.

While the Lady Blazers’ defense played well, it was not enough to win as Tampa broke through and scored crucial runs.

In their first game, a two-run home run off sophomore pitcher Mia DeAngelis in the fourth inning pushed Tampa into the lead, bringing the score to 2-1 for the remainder of the game. Following the home run, the Lady Blazers had just two hits over the final three innings, both of which came in the final inning.

In game two, after Sulte smacked a two-run homer in the top of the seventh inning to tie things up 2-2, disaster struck in the bottom half. With bases loaded, Richards walked Tampa pitcher Corynn Miner, allowing outfielder Avery Perkins to score the game-winning run.

The cold-hitting continued into their second matchup against Embry-Riddle. Much like their first game, neither team scored for the first five innings.

VSU came back in the sixth inning as junior outfielder Taylor Lewis was able to bring sophomore outfielder Kayla Tosone home on a fielder’s choice. The scoring continued as sophomore infielder Katie Proctor got the Lady Blazers two more runs via a home run.

The Lady Blazers added two more runs in the seventh inning, bringing a 5-0 win over the Eagles to close out the Embry Riddle Tournament.

While the setbacks against Tampa put a damper on what has otherwise been a strong start to open the season, the 6-2 Lady Blazers have one thing in mind: Getting back to the Division 2 College World Series.

“We just want to go out and perform the best,” Richards said. “We want to get back to nationals like we did last year… That’s what we strive for every day.”

The Lady Blazers will be at home for the first time this season on Feb. 19 and 20, where they will host Alabama Huntsville in a three-game series at the VSU Softball Complex.

Previous Photos: The demolition of Converse Hall
Next Diversity and Inclusion discuss “Being a Black Sheep in the Creative Community”