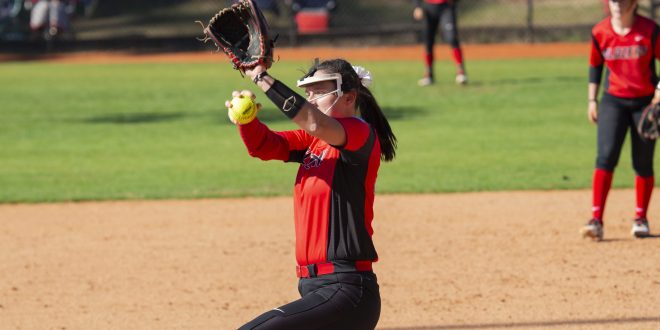 The series overall featured several game-changing moments that went in favor of the Lady Blazers. VSU was able to get the job done in three different fashions as part of a complete performance.

In their first game, the Lady Blazers jumped out to an early 3-0 lead thanks in part to graduate student infielder, Ally Clegg’s double to left field in the bottom of the third inning. However, the Lady Chargers rallied in the top of the fourth inning to knot things up 3-3.

VSU was efficient on offense, scoring 11 runs off 12 hits. Sophomore utility player, Morgan Hill led the charge with 2 runs, and 2 RBI, as well as a two-run home run in the sixth inning that helped close out the game.

The second game of Saturday’s doubleheader saw the Lady Blazers having to dig themselves out of a hole to prevail.

After Hill scored on a pop fly from junior outfielder, Abby Sulte in the bottom of the first, the Lady Chargers rung off five straight runs over the next three innings to take a 5-1 lead.

Following a pitcher’s change by VSU during the top of the third inning, the Lady Blazers kept Alabama Huntsville from doing more damage. However, VSU could not get going on offense, having just one hit between the second and sixth innings.

During the bottom of the sixth inning, the bats came alive for the Lady Blazers. Hill helped spark a comeback with a two-run home run, and sophomore infielder, Taylor Macera helped bring in the tying and go-ahead runs via a double to center field.

The Lady Blazers capped off the comeback by shutting down the Lady Chargers’ offense in the top of the seventh to secure the series.

While their second game featured VSU needing a comeback to win, the final game of the series had VSU on the other end of the spectrum and having to stave off a Lady Charger comeback.

Sophomore infielder, Aniston Gano got the scoring started in the first inning with a three-run home run. The Lady Blazers went up 4-0 in the third when Gano brought in another run with a single to center field.

The Lady Chargers began to mount a rally in the fourth inning when Lila Young smacked a two-run home run to put Alabama Huntsville on the board. They would score again in the fifth inning to trim the Lady Blazers’ lead to 4-3.

With the offense unable to have any success during the back half of the game, VSU’s defense stepped up in a big way over the final two innings to deny Alabama Huntsville a chance to score.

Richards again had a solid performance, striking out five batters and giving up just two hits over the last two innings of the game.

Following a road trip to Georgia Southwestern for a doubleheader on Feb. 23, the Lady Blazers will be back on the road again to face Lee for a three-game series on Feb. 26-27.

Previous The no. 24 ranked Lady Blazers keep rolling
Next Owens blossoms in second year with Blazers