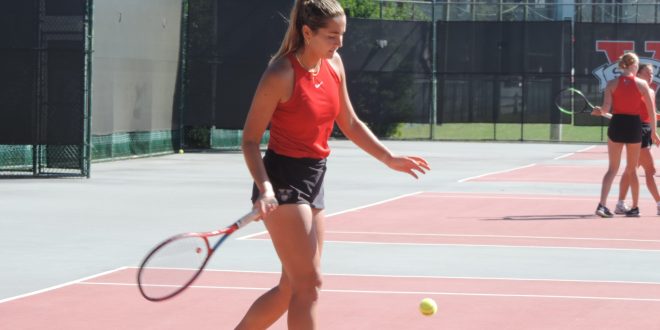 The VSU tennis teams got back on track with a pair of strong performances at home against Shorter on March 4 and Lee on March 5 to open GSC play.

For the men’s tennis team, the win over the Hawks was their 11th straight win in the series, a streak that dates back to 2013.

The Blazers opened up the match with a clean sweep of the doubles portion. Freshman Lamar Bartley and junior Christian Felline highlighted the section with a 6-0 takedown of Shorter’s Kiran Devaa Namadeva and Jovan Cirkovic as the Blazers took a 1-0 advantage.

The trend continued into the singles, as all six competing Blazers took their matches in two sets.

Felline, Bartley and sophomore Christian Wedel all shined in singles, each losing just one game over the course of their matches. Graduate student Swann Flohr also won convincingly in his match, dropping just two games.

The Lady Blazers put together their strongest performance of the season in their win over the Lady Hawks.

Much like the men’s team, the women’s team took all three of the doubles matches to grab a 1-0 lead. Freshman Natalie Kohoutkova and sophomore Rachelle Starreveld capped the round with a thrilling 7-6 win over Maria Martinez and Andrea Medel.

The Lady Blazers continued that trend in the singles, taking all six matches in straight sets. Freshmen Anastasiia Vorobiova, Andrea Barrio, and Adriana Barrio all took their matches with 6-0, 6-0 victories.

The Blazers continued their strong play into their match against the Flames.

The men’s team won two of the three doubles matches to score the first point. Wedel and sophomore Rodrigo Carvalho led the charge with a 6-1 win over Lee’s Wihan Van Der Merwe and Drew Johnston.

The Blazers kept it going into the singles, winning four of the six matches to put out the Flames.

Sophomore Cameron Trigolos opened things up with a 6-2, 6-3 win over Johnston, with Flohr following closely behind with a 6-2, 6-4 win over Der Merwe.

Sophomore Luca Mack helped secure the win with a 6-2, 7-6 win over Nico Ramirez.

The Lady Blazers were also able to make quick work of the Lady Flames.

Once again, the Lady Blazers swept the doubles portion of the match. Freshmen tandem Elisa Beau and Magda Tuells Bonet set the pace with a 6-1 win over Lee’s Hayden Smith and Lauren Trammell.

The VSU tennis teams will be back in action on Mach 7 when they travel to Orlando to face Barry.

Previous Photos: VSU after dark
Next Where do students prefer to study?