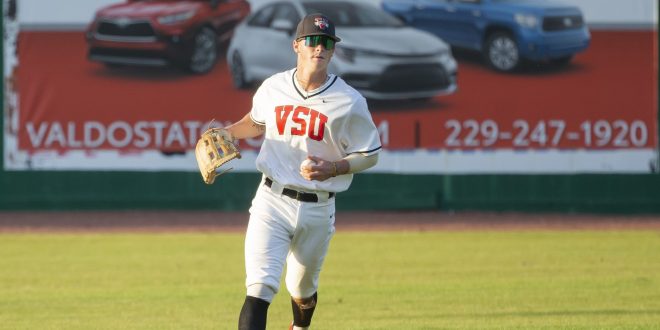 Blazers fend off Falcons, win 2 of 3

The VSU baseball (12-5) team collected another series victory this weekend, besting the Montevallo Falcons (14-4) two games-to-one. We are now a month into the season, and the Blazers have yet to lose a series.

With the two wins the Blazers move into the second spot in the Gulf South Conference with a 6-2 conference record.

The Blazers entered the series on a five-game winning streak after sweeping conference opponent Lee University the previous weekend and collecting a 1-0 win at nonconference Flagler College during the week.

The Blazers’ next games are in Tennessee next weekend at Union. The first games are on Saturday, March 12 at 2 p.m. and 5 p.m.  The third game is on Sunday at 2 p.m. It is another GSC matchup.

Blazers left hander Elijah Gill had another sparkling start on Friday night. The senior ace collected his fourth win on the season (4-1), allowing one earned run and striking out seven as the Blazers cruised to a 9-3 game one win.

Three of the six hits Gill allowed came in the first inning. Gill and the Blazers defense was lucky to get out of that inning unscathed as the Falcon’s R. Latimer hit a single hard into the outfield that was sure to score at least a run.

But an uncommon interference calls on his teammate S. Kuchinski running to second ruled the play dead and registered the third out to end the inning.

From there Gill was lights out, allowing only two Falcons to get on base until the sixth inning. At that point the offense had already done their job, running up an 8-0 lead.

Gandy and shortstop Ryan Romano drew walks to start the game for the Blazers and set up a would-be double play ball hit by Luke Ard on the next at bat.

However, Falcons’ shortstop Will Pratt missed on the throw to first and that’s all Gandy, the Blazers’ leading base-stealer, needed to round third and score.

Gandy’s speed helped again in the third inning when he singled and stole second base to get in scoring position for Romano.

Romano singled back to the Falcons’ pitcher, Josh Alpough, who missed his first baseman for the second time already that night. There would again be no play at the plate as Gandy scored from second.

Over the next two innings the Blazers’ bats got hot as they capitalized on four walks and another error from the Falcons to score six runs. That put the lead at 8-0 while Gill had been sending batter after batter back to the dugout.

In the top of the sixth inning, it was the Blazers’ errors resulting in runs.

The Falcons’ first runs of the game came with back-to-back outfield hits off Gill to open the frame, the only blemish on his day.

Gill struck out the next two batters and gave his defense one, and then two chances to get out of the inning by inducing grounders.

Instead, three straight errors scored two runs for the Falcons to make it 8-3. Gill eventually got the job done himself, ending the inning with his seventh and final strikeout of the day .

Relievers Adrian Garrastazu and Scott Curran closed the game out by striking out six Falcons over the final three frames and allowing only three hits. Graduate student Garrastazu extended his scoreless streak to nine innings Friday, having not allowed a run since February 16 at Saint Leo.

The Blazers manufactured one more run in the eighth inning, scoring despite not recording a hit, but in the end winning 9-3 isn’t much different than 8-3.

The Blazers’ outfield had a day at the plate, scoring seven of the Blazers’ nine runs, despite only recording four hits combined. David Crawford led the way with three RBI.

As a team the Blazers recorded only six hits, but untimely errors by the Falcons and six walks went a long way towards the nine runs.

It’s the sixth time this season the Blazers have scored at least eight runs, and all games have been wins.

It was the Falcon’s putting runs on the board early in game 2 on Saturday. The Blazers got off to a tough start to the day on both sides of the ball as they fell 10-1 in the first game of the doubleheader.

Blazers starter, sophomore JJ Finn didn’t finish the third inning and collected his first lose on the season (3-1). By the time left-handed junior Mason Sharp came on in relief, the Falcons were already up 4-0.

Sharp did his job and held the Falcons scoreless through the fifth inning, but he hadn’t gotten any run support. It wasn’t for lack of trying, however, the Blazers had opportunities.

The Falcons didn’t have any problems in that department in game two. In the sixth inning they tacked two more runs on with their second two-run home run of the game, this one off of left-handed reliever Zach Henderson.

After a quiet sixth inning the Blazers finally put a run on the board in the seventh when Ard poked the ball into left field to score Bryson Gandy and bring the score to 6-1.

In the top of the eighth inning the Falcons hit their third two-run blast of the game right after a Ryan Latimer line out scored another run to make it 9-1. And if that wasn’t enough, they’d score one more in the ninth to put the icing on the cake, 10-1.

The loss ended a six-game winning streak for the Blazers, and it was the Falcons’ first win against the Blazers since winning 1-0 in extra innings in April 2019.

The Blazers only got four hits in game 3, but it was enough for the 1-0 win behind a scoreless effort from the Blazers’ pitching staff.

Kevin Tomas got the start and immediately cooled off the Falcons’ bats, sending six of the first eight batters back to the dugout without touching a bag. Tomas went five scoreless innings on Saturday, allowing only four hits and no walks.

But that’s just another day at the office for the right-handed starter, Tomas has only allowed more than four hits once this season, and in his four starts he has allowed only 16 total hits (currently first among VSU starters with a .222 batting average allowed.)

With both teams struggling to get on base for the first four innings of the game, the Blazers knew they needed to capitalize when Doskow got himself in scoring position with a leadoff double in the fourth inning.

The next man up, designated hitter Orlando Adams advanced Doskow with a well-placed bunt to sacrifice an out but put the go ahead run 90 feet closer.

That extra base would prove crucial when Doskow scored the first and only run of the game on a wild pitch two at bats later.

Doskow, who leads the GSC in RBIs, stranded two batters in the fifth with a foul ball to end the inning as he couldn’t capitalize on the only other opportunity the Blazers would have to score a run.

But relievers sophomore Scott Curran and junior Brandon Raiden were lights out over the final two innings aside from a scare resulting from an error in the seventh.

Nothing would come of the miscue, an errant throw, and the Blazers took home the close win, 1-0, to improve to 12-5 on the season. Raiden earned the save.

Despite scoring only two runs on Saturday, the Blazers split the games 1-1 with the Falcons. Ard recorded the only RBI for the Blazers on the day, while Ard, Doskow, Gandy, and Romano led the Blazers with two hits across both games.

Previous Where do students prefer to study?
Next Freedom of Expression: A Brave Space Dialogue