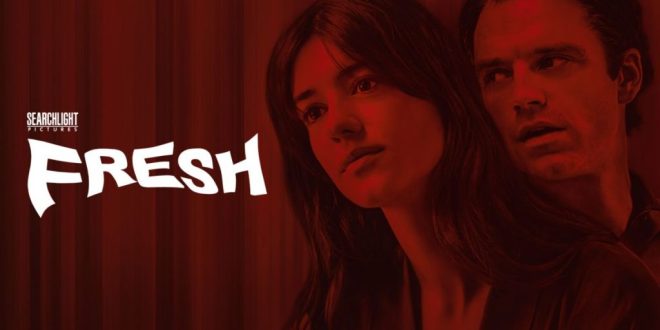 On Jan. 22, Hulu released its original movie “Fresh,” a brand new horror film that currently has an 81% rating on Rotten Tomatoes.

The film features Sebastian Stan, known for his role as James Buchanan “Bucky” Barnes/The Winter Soldier in the Marvel franchise, and up-and-coming actress Daisy Edgar-Jones, who starred in “Normal People” as Marianne.

If you like gory but laid-back horror, this movie is for you.

It follows Noa (Edgar-Jones), a young woman who grows tired of internet dating following a series of bad experiences. When she meets a man named Steve (Stan) at the supermarket, the two flirt and decide to exchange numbers. After going on a few dates, Steve eventually asks Noa to go on a weekend vacation with him, and that’s when everything goes wrong.

This film has everything: Hot people, mystery, twist, gore, conspiracy and some hardcore girl boss moments. It features a very iconic dance scene that has already made its way to social media apps like TikTok.

If I were to compare this movie to a different film or show, what comes to mind is a mix of “American Horror Story: Murder House” and “The Silence of the Lambs.”

If you are not into gory stuff, this movie may not be a good viewing option, but the plot definitely outweighs the gore. Its level of interesting horror does not fall under the typical category.

Previous VSU’s ACTION rallies to change name of Troup Street to Mary Turner Street
Next Photos: What Should You Have When Studying?