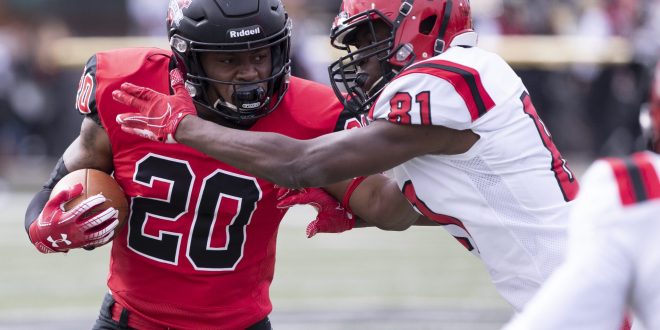 One of the biggest traditions VSU has to offer will be back as Homecoming week has returned.

While Homecoming is meant to be a time where current and former alumni return to campus and celebrate the university, it takes on an entirely different meaning in football.

It is no secret that every football team has the goal to go out and win every game on their schedule. However, teams have extra motivation to win on Homecoming weekend, regardless of their team’s success to that point.

Just as teams want to win on Homecoming, the opposition would like nothing more than to spoil the festivities.

Fortunately for the Blazers, Homecoming has been kind to them in the last decade. The Blazers have gone 10-1 on Homecoming since 2010.

In years past, Homecoming games have served as an indicator for how the rest of the season would go. Here are some of the notable results from the last decade.

In a game between a pair of top 25 teams, the then No. 12 Blazers’ defense stepped up in a big way as cornerback Matt Pierce recorded two pick sixes on the game.

His second one proved to be the dagger as he returned an interception 85 yards to the house for the go-ahead score with just over five minutes remaining. The win pushed the Blazers to 6-1 on the year as they looked primed for a playoff berth.

Both the Statesmen and the Blazers put on a show as quarterbacks Trevor Wooden and Cayden Cochran duked it out.

The Blazers took at 31-14 lead late in the first half but found themselves trailing 41-38 in the third quarter.

However, it was VSU’s Cochran who won the battle of the quarterbacks. Cochran found wide receiver Seantavius Jones for a 33-yard touchdown, his fourth receiving touchdown of the game.

The Blazers’ defense took over from there, picking off Wooden twice in the fourth quarter. Meanwhile, running back Cedric O’Neal sealed the victory with a pair of rushing touchdowns as he surpassed 160 yards on the day.

Like the other games listed, the Blazers were in another battle as the Panthers and Blazers were both fighting for a playoff spot in the final week of the regular season.

It was a back and forth affair heading into the second half. A 76-yard bomb from quarterback Mark Cato to Kenny Johnston put the Panthers out in front 21-20 just over a minute into the third quarter.

However, it was all Blazers the rest of the way as they scored the game’s final 19 points. The Blazers leaned on their ground attack as O’Neal, running back Eric Scott and quarterback EJ Hilliard all found the end zone.

The Blazers sealed the game with an interception by cornerback Raymond Palmer as the Blazers clinched a playoff spot and ended the Panthers’ season.

The Blazers made it to the second round of the playoffs before falling to archrival West Georgia 27-20.

The 2015 season also marked the last year for Dean, as he accepted a job as the co-offensive coordinator at Georgia Southern before eventually taking the head coaching job at West Georgia. VSU then hired Kerwin Bell as the ninth head coach in program history.

As the Blazers entered year three under Bell, the then No. 7 Blazers were off to a flying start, starting off 7-0 after missing the playoffs in 2017.

Their hot streak included a dominating 58-24 win over then No. 8 West Alabama, who had beaten VSU on Homecoming the year prior.

The trend continued as the Blazers hosted the North Greenville Crusaders, who entered the game 4-2. The Blazers raced out to a 23-0 halftime lead.

The Crusaders would eventually draw within 16, trailing 37-21, in the middle of the fourth quarter. However, then freshman quarterback Ivory Durham erased any chance of a comeback, finding wide receiver David White for a 60-yard touchdown.

The Blazers continued their winning ways for the rest of the season, going 14-0 and winning their fourth national championship. The Blazers defeated Ferris State 49-47 in an instant classic.

After the season, Bell left to take the offensive coordinator position at South Florida. Bell was then replaced by Gary Goff, who played wide receiver for VSU from 1993 to1996 and helped lead the Blazers to their first-ever conference title.