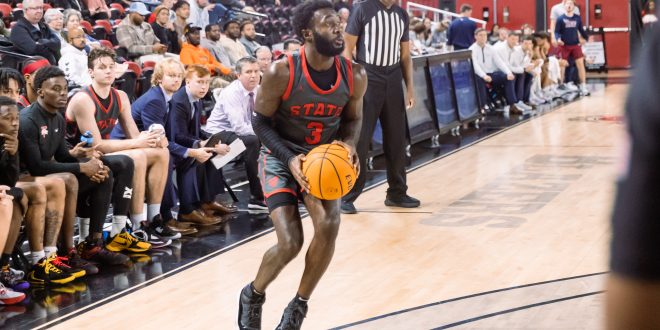 The men’s basketball team has a new member of the 1,000-point club.

Redshirt senior guard Cam Hamilton became the 26th Blazer to pass 1,000 points in his career. He reached the mark late in the Blazers’ 121-92 win over Clinton College.

“It’s an indescribable moment,” Cam said of the milestone. “It’s one of those moments you’re just kind of like, you’re just thankful, you’re just happy to be able to continue to play the game you love.”

It has been a long road for Cam, who is playing his sixth collegiate season. Cam started his career at The University of North Carolina at Pembroke, redshirting his first season and playing in all 30 games his second season before transferring to VSU.

“I’m not exactly sure how we got the call, but I think we knew he was leaving,” Helfer said. “I really liked Cam, and I like how he played and what he did in high school.”

Although his role on the team has changed throughout his time at VSU, Cam views himself as a leader both on and off the court.

“I’m just more of a leader, like not even more on the court, like just off the court, just checking on people, motivating people, bringing the humor, like just different things to bring my teammates [together],” Cam said. “You never know what people’s going through off the court. It’s so much that we have been dealing with, even myself, over the past few years.”
Helfer also holds Cam in high regard.

“Fantastic,” Helfer said of Cam. “One of the best people that you would want to be around. And, you know, like he’s just always got a smile on his face. Everybody likes him. He’s very competitive. He’s just a really, really good representation for our program.”

Upon arriving at VSU, Cam instantly made a name for himself, leading the team with 47 made 3-pointers. He also tied for a team-high 43 steals in the 2019-20 season, which was cut short due to the coronavirus pandemic.

Cam’s role grew in his second season with the Blazers, starting 14 of the Blazers’ 22 games. He was a key contributor, finishing third on the team in points and helping win the team’s first-ever Gulf South Conference tournament title.

“I’ll never forget winning the ring and being able to play in The Complex,” Cam said.

Cam continued to excel in the 2021-22 season, finishing second on the team in points. He also once again set a team-high in made 3-pointers with 64.

So far this season, Cam has averaged 8.7 points per game and scored 78 points during the Blazers’ 6-3 start.

While Cam is excited about the milestone, he is just as proud of what he’s accomplished off the court while at VSU.

“It’s been life-changing,” Cam said. “Just being able to get my degree and possibly coming up with another degree for free, all for free, is a major blessing.”

Helfer, who is entering his 18th season with the Blazers, has coached seven of the other 25 1,000-point scorers. Helfer believes that Cam’s size often leads to people believing he’s not a good scorer.

“His size, he’s little, so you might not think that he is going to be a big scorer, 1,000-point scorer,” Helfer said.

“It just goes to show you that in today’s game, you don’t have to be 6-foot-10 to average a lot of points or to score a lot of points. He just scores in so many different ways, and he’s just super tough, and I think that’s kind of what sets him apart.”

Previous The 1975: ‘Being Funny In A Foreign Language’ Review
Next Editorial: Is Georgia’s runoff system really fair?