Two weeks into the 2015 fall semester, the VSU community is still adjusting to the announcement of the reduction in the size of the university’s faculty and staff.

Prior to the start of the school year, 31 university employees were informed that their contracts would not be renewed as of July 1, 2016.  The affected employees will serve out the rest of the current fiscal year before they will have to find work elsewhere.

These staff reductions come after an exhaustive slew of events that contributed to a significant decline in enrollment.  A high-profile student protest which received national attention, along with a number of campus crime incidents, coupled with the influence from competing colleges and universities has led to a nearly 10 percent drop in incoming freshmen for the current school year.

The VSU administration is attributing the cuts to this decline.

“These decisions were taken because VSU’s enrollment has declined from 13,000 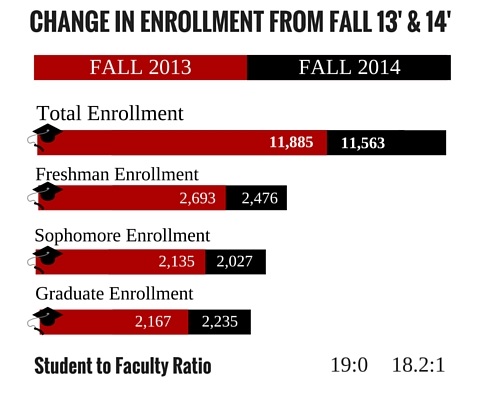 to approximately 11,250 this fall,” said Interim President Cecil P. Staton, who replaced former president William McKinney in July. “When the university has fewer students, we need fewer faculty and staff. It is that simple. We cannot afford the same sized faculty and staff without running deficits, and we are not allowed to do that by state law.”

Although a drop in enrollment could justify the staff cuts, the timing and manner in which the reductions were handed down has left many in the VSU community doubtful and suspicious of the administration’s motive.

“The administration touts the oversimplified motto, ‘we have fewer students, we need fewer professors, it’s a[s] simple as that.’ But it isn’t as simple as that. These were blanket cuts made regardless of student to teacher ratios, and with a free pass to all professional staff (aka bureaucrats), administrators (and sports),” said Assistant Professor of Biology Dr. Joshua Reese.

Dr. Reese is one of the 31 faculty and staff members whose contract will not be renewed next summer.

The question of whether layoffs were the only solution has also been raised. Dr. Stephanie Hinnershitz, an assistant professor in the history department, was another of the faculty members to receive bad news.

“I do think there could have been some more investigation into other areas to cut,” said Hinnershitz. “A lot of schools and universities do furloughs so that lay-offs like these are a last resort. Other members of the campus community suggested that cuts in administrative pay could have saved at least a few jobs, while others argue that perhaps some cuts in the athletics budget could have helped, as well.”

Although there were cuts across departments, the College of Arts and Sciences saw the most reductions.

“It is true that the College of Arts and Sciences experienced the largest number of position reductions, but this is because approximately 43,000 of the total credit hours lost (48,651), were from within that college,” said Dr. Staton.

On Wednesday, Dr. Staton responded to what he referred to as “misinformation” regarding the adminstration’s actions.

“It is incorrect to say that these decisions were taken without the input of department heads, deans, or department chairs,” he said. “All were asked to look carefully at their areas, their missions, and then follow the law and University System of Georgia and VSU policies and procedures before making recommendations. That process was followed and honored at every point.”

How this will affect the university moving forward is up for debate. Some of the downsized faculty are concerned that students will be adversely affected by the cuts, while Dr. Staton states that this will not be the case.

“Given that these reductions are based on reduced enrollment, no hardships or reductions in service to students is anticipated,” said Dr. Staton.

While this reassurance could be seen as a sign of relief, some members of the VSU community beg to differ.

”The claim by our interim president that these cuts will not affect students’ educational experiences is illogical; it is akin to telling someone that if they have five apples, and you take two, they will still have five apples,” said Dr. Cy Mott, Assistant Professor of Biology.

Dr. Staton will make an appearance today at the Faculty Senate meeting at 3:30 p.m. in the University Center where the reductions will be on the agenda.