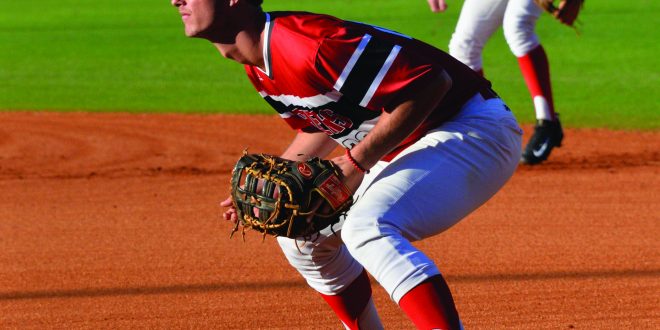 Suchon: raking through the GSC

When VSU Baseball’s Luke Suchon comes to the plate, take the over on him getting on base.

The Blazer first baseman has the best batting average in the Gulf South Conference at .545 and the best on-base-percentage at .594. In turn, VSU is in third place in the conference with a 11-4 record on the season (4-2 in the conference).

“Luke’s our best hitter on the team and it seems like he’s always on base getting three and four hits per game,” senior outfielder Marcus Sigmon said.

So far in 2017, the Blazers have ridden the offense of Suchon and his teammates, such as Dalton Murray who has the second best average in the conference at .500. VSU has scored seven or more runs in 11 of their 15 games.

Suchon, however, has been performing at the plate for quite some time. Baseball is in his blood.

Suchon was introduced to the sport by his father, who spent time in the New York Mets’ farm system. Suchon first picked up a ball as a three-year-old, and he hit his first home run at 10.

Although he is originally from Clearwater, Florida, Suchon played high school baseball for Clay High School out of Green Cove Springs, Florida.

“In high school, I was on junior varsity up until half-way into my sophomore year,” Suchon said. “I was moved up to varsity to play in the playoff games and was on varsity from there on out.”

While at SSCF, Suchon was a second team all-conference player as a freshman for the Raiders. As a sophomore, he was named the All-Mid-Florida Conference defensive player of the year.

“He was a really good hitter in junior college,” said Head Coach Greg Guilliams. “I also was in contact with Head Baseball Coach Ross Jones from St. Johns River State College out of Jacksonville, Florida, and he told me you better get him because we couldn’t.”

About halfway through Suchon’s sophomore season at SSCF, he began having contact with Guilliams.

“I came on a visit and loved Valdosta and was hooked right away,” Suchon said. “A combination of the field, the coaching staff, and the city all contributed to my decision of coming to Valdosta State.”

Suchon is at the top of a lot of stat categories. Along with average and on-base-percentage he leads the GSC in hits (30) and he has a 1.000 fielding percentage. He also has been a part of 11 double plays, which is second most in the conference.

Guilliams said Suchon is a well-rounded player on and off the field.

“In three words, I would describe Luke as intelligent, hard-working and a team player,” Guilliams said.

Although Suchon is only a junior, he said he has hopes of paying baseball professionally or pursuing a career with his history degree after college.

Suchon said playing baseball at VSU has given him life skills as well as baseball skills.

“Playing for VSU so far has taught me to be a leader in life and not just in baseball,” Suchon said. “It also has taught me to really love your teammates and the people that you work with.”

The team’s next game will be played in Valdosta against West Alabama on Saturday, March 4 at 1 p.m.