Home / Sports / Football / Spring football is in the air 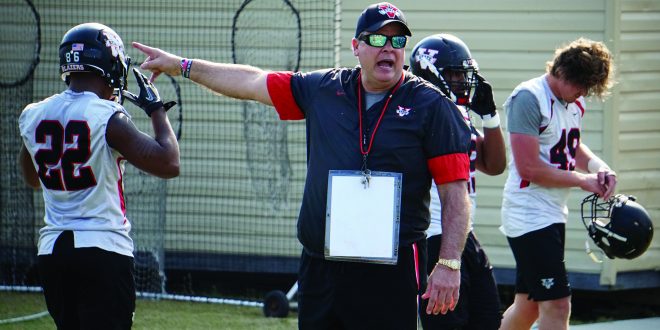 Spring football is in the air

Four months after heartbreak, VSU Football is springing into the swing of things.

Head Coach Kerwin Bell looked poised to take the Blazers on a deep playoff run in his first season as head coach. The Blazers won seven of their last eight games in the regular season before losing in the first round of the NCAA Division-II Playoffs to UNC-Pembroke at home.

VSU only lost by three points in the 24-21 final. However, they never led in the game, and they trailed by as many as 17 points in the first half.

“We feel like we didn’t quite live up to where we needed to be,” Bell said on the playoff loss. “That certainly isn’t our expectation to lose like that in the first-round.”

One of the things that hurt the Blazers down the stretch was the quarterback competition between Adam Robles and Roland Rivers. The same competition has the potential to stretch into this season for VSU, with Robles opening the spring practice as the starter and Rivers being sidelined with a nagging injury from last season.

Rivers started last season but was benched in the second game of the season after struggling against North Alabama. This opened the door for Bell to use Robles, who showed promise. The UNA game launched a quarterback competition between the two that would last the entire season.

The competition effectively ended when Rivers suffered an injury against Florida Tech with two regular season games remaining. The injury did not keep Rivers from dressing out, and he seemed available for the final games of the season. He even warmed up on the sidelines before and during the playoff game.

However, Rivers was not dressed for the first day of spring practice and took no reps at quarterback. With the first game of the season being nearly six months away, there is no rush or premium on Rivers’ return.

One player who could be directly affected by the quarterbacks’ play is senior wide receiver Dallas Baldner.

Baldner was second in receptions, receiving yards and yards per game for the Blazers last season.

He was a part of the recruiting class that came in after the Blazers’ last championship in 2012. He attributes his coming to VSU to the hopes of winning a championship, and four years later that has not changed.

The only thing that has changed for Baldner is going from an underclassman with sparse playing time to being the top receiving target and playmaker for VSU.

“Since I am going into my last year, I am really taking everything into consideration and slowing my mindset down to focus on the little things,” Baldner said. “In the weight room or the classroom, I am just making sure I am on top of all my things . . . so that when I come out to practice I can just play the game I love.”

Unlike the upperclassmen, the 31 signing-day signees or young redshirt players might suffer from a lack of experience, but Baldner wants to be a leader they can look up to.

“Being really vocal but also leading by example, making sure I’m doing everything right and do all of the little things so that the younger guys can see what I’m doing right, that’ll build a tradition for when I leave here,” Baldner said.

Bell said he thinks two of those younger players might have the offensive impact that GSC Freshman of the Year Cedric Hollingshed had.

“Deandre Butler and Isaiah Johnson, we redshirted both of those guys last year. We think they could give us that big play ability that we are lacking on offense,” Bell said. “We’re going to give them a lot of carries this off-season and see if they can produce for us.”

With the Blazers losing key pieces on both sides of the ball, it will take more than pure talent. The Blazers are going to have to get back to playing like a family if they hope to win another title.

“It’s just going to take everyone buying in and getting in the same routine,” Baldner said. “We have a lot of great players and a lot of big assets on this team. I think right now we’re just going to focus on coming together.”