Home / Sports / Softball / Jessica Mohl leads on and off the field 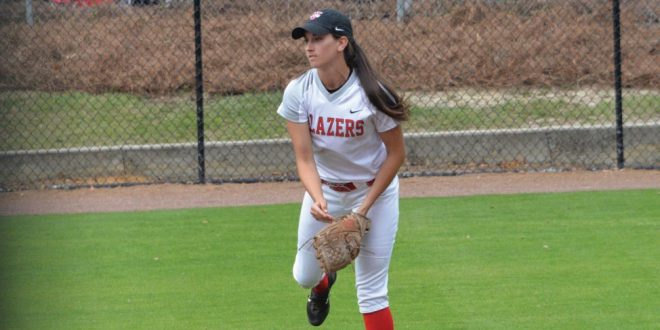 Jessica Mohl leads on and off the field

Like her mother and four sisters, Mohl was continuously around the field and knew softball was going to be a part of her life.

Mohl played for American Heritage High School in Delray Beach, Florida. In high school, Mohl posted 62 career RBIs with a 0.425 career batting average and 71 stolen bases over two seasons. She continued to earn First Team All-State recognition and she finished by hitting 0.541 during her senior year.

Mohl said she enjoys being able to play her favorite sport, but she also enjoys the people and atmosphere of VSU.

“My favorite thing about playing in Valdosta is the fans, boosters and the family atmosphere.” Mohl said. “Even when my family isn’t here, there are still people cheering me on.”

Mohl said she also enjoys the friendships she’s developed with her teammates.

“I count all of my teammates as friends,” Mohl said. “No matter what, I know I can have a bad day and turn to them, and they’ll be there for me.”

Mohl said her close relationship with her teammates made it easy to step into a leadership role. VSU junior outfielder Brandy Morgan said Mohl is a great friend and leader.

“She’s a very vocal leader on the field,” Morgan said. “When she steps out there, you know that she’s in charge and that she’s going to give 100 percent effort all the time.”

“A lot of times you see people that play for themselves, and she’s just not one of those players,” Morgan said. “She’ll take the shirt off her back and give it to you if she needs to. She’s a very good player and a good leader.”

At shortstop, Mohl is involved in almost every play. Morgan said she feels comfortable with Mohl being a focal point of the team.

“She’s very important because playing shortstop and being a lead-off batter, you have a lot of unknown pressure.” Morgan said. “They are such important positions on the field. Shortstop, you get a lot of balls, action and you’re constantly moving in the field, and the lead-off batter sets the tone for the day.”

Morgan said Mohl is also an accessible leader off the field.

“Off the field, she’s there to help everybody,” Morgan said. “She’s a good friend to call on or just to have a casual conversation with.”

Head Coach Thomas Macera said Mohl is one of the best players in the country for a multitude of reasons.

“She’s just an all-around player,” Macera said. “She’s a good hitter, good on defense and very consistent. Her level of play makes her a great leader. She’s one of the top players in the country, and when you play that well, it makes a difference.”

After VSU, Mohl plans to get her master’s, attend fire school and get her certificate in EMT to become a paramedic. She eventually wants to take the state test in Florida to become a firefighter. Mohl said she enjoys playing with her roommate’s dogs when she’s not playing softball.

“My short term goal for the season is to get on base at least once a game and not make any errors, while my long term goal this season is to win The National Championship.”