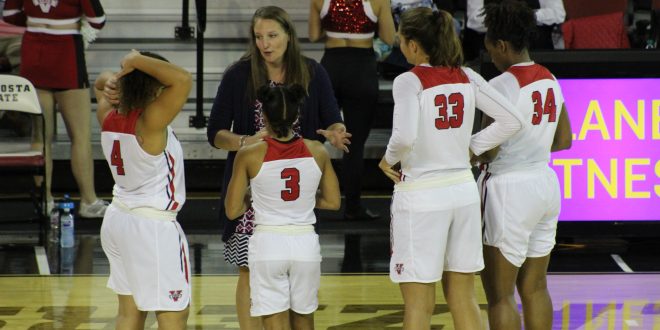 The VSU Women's Basketball team won both of their weekend match-ups against Fort Valley State and Albany State. Newcomers Taylor Buie and Kayla Bonilla started for the Blazers in both games over the weekend.

The Lady Blazers faced Fort Valley State in the season opener on Friday night and took home an 87-53 win. Preseason All-GSC member Madi Mitchell was inactive for the game due to a leg injury but her teammates made up for her absence.

With the absence of Mitchell, 5’0” Freshman Kayla Bonilla got the starting nod from Head Coach Carley Kuhns to begin the game and made an immediate impact for VSU. Bonilla scored 12 points, making all of her attempts for the night.

As a unit, the Lady Blazers put an emphasis on grabbing rebounds and being active on defense. The squad outrebounded the Wildcats 43-30.

“Sometimes your shot may not be falling, sometimes you may not get as many touches as you want, but what you can do is play defense and rebound,” Samone’ Dixon said after the win on Friday.

The efficient rebounding and defense allowed the Lady Blazers to excel in all aspects of the game. The team shot 48.3 percent from the field and 37.0 percent from three-point range, led by Aaliyah Cheatham’s five three-pointers and eight made field goals.

“Aaliyah Cheatham obviously came ready to play and hit some huge shots for us,” Kuhns said. “She put the ball in the whole early and everyone jumped on her back.”

The next game improved VSU to 2-0 on the season, as the Lady Blazers defeated the Lady Rams of Albany State 76-47.

Albany State took the first lead of the night after opening the scoring for the game with a three-pointer but soon found themselves on the wrong side of a 17-6 run over the next eight minutes of play.

The Lady Blazers struggled to find consistent rhythm in the first half only converting 10-31 field goal attempts and only 3-13 from distance. However, they found success at the free throw line, making 14 of their 16 attempts.

VSU took a 10-point advantage into the half despite the poor shooting from the field.

In Saturday’s contest, Mitchell saw her first in-game action of the season. Her playing time was short-lived with only ten minutes of play, but she scored nine points on the night.

“The trainer told me to go ahead and get her some minutes, so that she can get her legs back under her,” Kuhns said. “She did some good things.”

The Lady Blazers are now looking forward to their next game, as they will travel to Americus, Georgia to take on Georgia Southwestern. The game will take place tonight at 6 p.m.