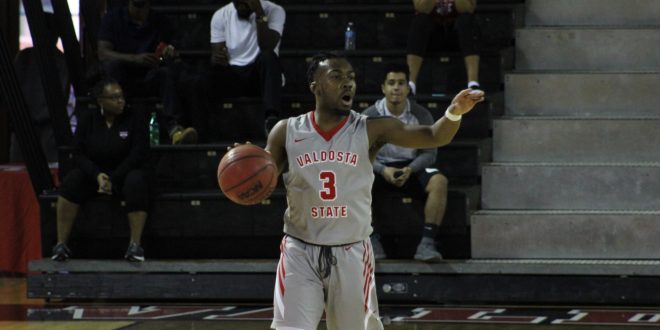 VSU Men's basketball will head to Pensacola to open conference play with a perfect record.

The VSU men’s basketball team will be traveling to Pensacola, Florida for the first conference game of the season against the University of West Florida Argonauts. Both teams have perfect records thus far, so one team will be getting their first loss of the season this weekend.

“The game is going to be a dog fight,” senior forward Jimmy Kodet said. “It is going to be a hard place to win in and a lot of Gulf South Conference teams are going to go in there and win and we are definitely one that can do it.”

With the game, also being the first conference play for the Argonauts, the game more than likely be highly competitive. Last seaoson, the VSU men’s basketball team ended the season at the top of the conference with a 19-3 record, which included two wins against UWF.

“I would expect a typical GSC game that is very physical and competitive,” said head coach Mike Helfer. “We need to realize that all conference games are important and starting on the road will be a very difficult task.”

The VSU men’s basketball team has had a spotlight on defense recently, as they have been putting up numbers the last few games.

The team had a total of 52 rebounds just in their recent match-up against Webber International.

“We make sure that we do a lot of repetition,” said Kodet. “We have to have it seared into our brains that we are going to be at the right spot on the court when we need to be.”

This season UWF stands at the number one spot with a 7-0 record and VSU is in second with a 6-0 record. Both of the teams have had the opportunity to scout each others play in two separate tournaments this season. However, this will be the first time the two teams are facing each other head to head.

“We are not looking at our record, “Helfer said. “We are just trying to play our best each and every night. We need to do things the right way and play as hard as we possibly can and see what happens.”

Although it is still early in the season, the team has been preparing for the upcoming conference games such as the one against UWF.

“They have a lot of athleticism and guys that can jump high and do crazy things,” Kodet said. “We are going to go in play our game: score the ball, shoot, and beat them up the court.”

The game will be played today at 5 p.m. EST in Pensacola, Florida.