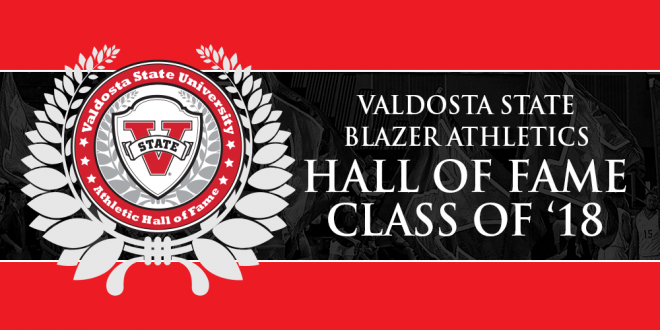 The 22nd annual Hall of Fame ceremony will take place on Saturday morning.

The 2018 Athletic Hall of Fame Class has been announced. The official ceremony will be held on January 20, 2018 at 10 a.m. in the Student Union Ballrooms. This will be the 22nd class that is inducted into the Athletics Hall of Fame.

The class will consist of:

Ferrell is a former employee that has contributed to VSU for the better part of 50 years. He donated to the not only student-athletes but also to the Valdosta community.

Boberg lead the team with averages of 75.9 or better in his three seasons with VSU Golf. He was awarded consecutive All-American honors in 1998 and 1999.

Hansen recorded a 17-3 doubles record and a 9-2 singles record to help guide VSU Tennis to a 17-1 season in 2011. Hansen was an essential piece to delivering the 2011 GSC Championship, South Regional Championship and the Division II National Championship. This was on the way to being selected ITA National Player of the Year in 2012.

Harper had a .325 batting average, with 50 doubles and nine homeruns in her career. She was the first Lady Blazer to earn All-American honors for Softball in 1999.

Allen was selected as the 1988 GSC Freshman of the Year and amassed 3,071 rushing yards during his four year career which places him fourth all-time in VSU history.

Fike was a dual sport athlete that saw success on the field and court. Fike became the first position player to ever be selected for All-Gulf South honors for his effort on the baseball field.

Hubbard posted 1,783 career points through a four year career for the Blazers. He averaged 16.5 points over his career and is fourth all-time on Men’s Basketball scoring list.

All guest are invited to come to the Men’s and Women’s Basketball games later in the day against West Georgia. Women tip off at 2 p.m. and the Men’s game will follow at 4 p.m.

Editor’s note: This story was updated by Juston Lewis on January 17 at 6:33 p.m.