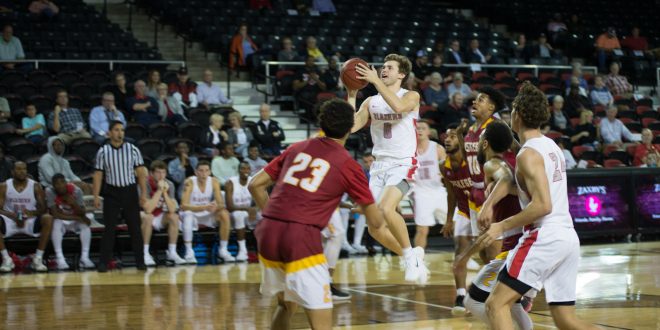 VSU Men's Basketball is undefeated in all contest that have been held at the P.E. Complex this year.

Tuesday night, the No. 22 ranked VSU Men’s Basketball team cruised into a 107-81 win over the Tuskegee Tigers in a non-conference matchup at The Complex.

Coming off their first loss last week to West Florida, the squad came back in dominant form to get their seventh win of the season.

The Blazers were vicious on both ends of the court, but their scoring performance was evident to every fan in the bleachers.

The scoring burst came from the efforts of Beau Justice, Tyrone Sam, and KJ James, who each scored above 20-plus points in the game.

Justice scored a game-high 25 points, while James scored 22. Sam came off the bench for 21 points in 23 minutes.

Senior Jimmy Kodet and Junior Greg Zuppas both added 12 points to total of five double digit scorers for the Blazers.

Sam reflected on the feeling coming into the game with instant offense for the Blazers.

“It was just momentum,” Sam said. “This was the first time we’ve had big crowd tonight, so it’s just going to keep getting better and better for us.”

Justice was not so proud of his offensive performance, but he said the win was most important.

“It’s never a bad night when your shot goes in,” Justice said. “I’m kind of a perfectionist, so I would’ve liked to see all of them go in.”

Preparing for the game, Head Coach Mike Helfer wanted to come out with a tone.

“We wanted to be a little more aggressive at both ends of the floor,” Helfer said. “Offensively, we shared the ball so well early on and took what was available to us.

The Blazers also controlled the glass 41-31, which ultimately led to 16 second chance points.

Helfer emphasized making a statement in the paint to get the team open looks for points.

“We really just wanted to go inside and get shots in the paint,” Helfer said. “I think our guys really understood and helped open up our perimeter shooting.”

The Blazers are having a good year so far, but Helfer wants more from his guys as the season gets tougher.

“We’ve got to get a little bit tougher physically around the rim,” Helfer said. “We are going to have to be tougher in the GSC if we want to have any success.”

The Blazers remain unblemished at home and improved to a 7-1 record, while the Tigers fall to 1-8 on the season.

Coming up for the Blazers is a road contest against the Fort Valley State Rams in Fort Valley, Ga. These two squads played earlier in the season, in which VSU came away in a close 83-81 win. Tipoff is at 7 p.m. EST on Tuesday, Dec. 12.

Previous What’s your Take: A Rose Without Petals
Next 2018 Hall of Fame class announced