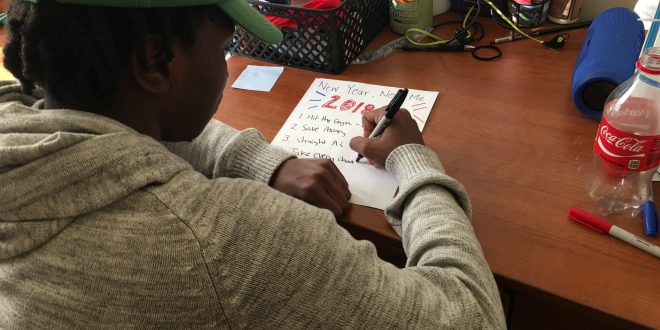 Nathan Pettway, a sophomore computer science major, making a list of his resolutions for the New Year.

Why New Year resolutions are important

We’re a few weeks into the new year and while some resolutions are still thriving, others have failed.

Many people made a new year’s resolutions with hopes for a big life change in 2018. Hashtags such as #2018goals, #newyearnewme and #outwiththeold floated across all the top social media sites as the new year approached.

“I think people make a resolution so they can have something to look forward to and work towards during the year,” Julianel Román, a sophomore engineering major, said.

The phenomenon of waiting until the beginning of a new year to make a change is common, but hard to accomplish for some. People across the world make promises to eat healthier, get more exercise, make new friends, save more money, focus on their self-care or whatever they choose.

“Most people see new years as a fresh start and a clean slate, so they take the opportunity to put in effort to better themselves and change,” Tyler Bentley, a senior English major, said.

Some students admit to not being able to follow through with their resolution in past years because of lack of preparation.

“This is the first year I’ve actually made a new year’s resolution, so I don’t have a track record,” Payton Gallant, a sophomore psychology major, said. “I think people don’t follow through with it because they get so busy with their lives that they forget about it or don’t have time.”

Managing a year-long promise can be hard because of time constraints, unforeseen circumstances and other reasons. It takes time and effort to stay on track to accomplish a goal and people struggle with staying on track.

“I decided not to make a new year’s resolution because I’ve been trying to better myself all of 2017, so I didn’t use new years as a starting point because it probably would’ve been too hard,” Bentley said.

According to the American Psychological Association, in order to make a new year’s resolution stick, one must start small. Some examples would be to change one behavior at a time, share experiences with others, ask for support or not fret over mistakes that they make.

“I made a resolution to take every opportunity that is presented to me,” Gallant said.

Hopefully 2018 will bring many people the joy and growth that they are promising themselves. As long as they remember why it is important to follow through with their resolution, then change will come even if it is small.

Previous Students discuss Trump’s Twitter post against North Korea
Next People Poll: Do you go to the first day of class?