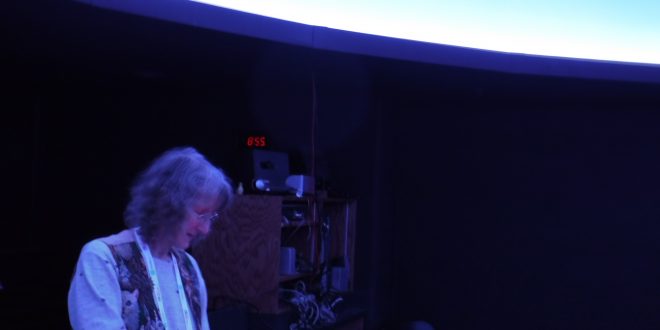 The planetarium show on February 23rd, 2018, played an animated short story for kids around Valdosta named “Larry, Cat in Space.”

“Larry, Cat in Space” was a short, funny children’s animation made to help teach children about the moon. None-other-than Larry the Cat himself narrated his exciting story. Larry told the audience about how he ended up on the moon, or “meoown,” as he called it.

One of Larry the Cat’s owners got a job working on the moon collecting moon samples and testing them. This job required she live on the moon, which Larry the Cat was not happy about at all. He tried to tell her, but of course, she could not understand him. After one of his beloved owners left, Larry became angry at the rest of the household and stayed as solitary as he could until he found his moment to go to the moon with her. After packing some of his toys and food, Larry hid away in a suitcase filled with clothes his owner’s parents had packed to send up to their daughter. Larry went to the moon and lived on the base with his owner and her colleagues, who loved him as well.

“I think this is a good and fun way for kids to learn about space,” said Dr. Martha Leake, the Feb. 23 presenter and professor of astronomy and geosciences at VSU.

Many of the people who went to the planetarium show were families with their young children. There were also a few college students who went as well for class. Though this planetarium show was geared toward younger kids, there are two others later this semester. The next show, “Ladies of Harvard, ” is about the women at Harvard who identified many new stars, nebulae and galaxies. The women also calculated the temperature and motion of stars. These women did not make much money and worked almost all week with little recognition until far later on. The other show “Defending Earth,” will be about the Planetary Defense Coordination Office at NASA. The PDCO monitors and plans defenses against potentially hazardous objects (PHOs) like asteroids and comets.

The planetarium runs three shows starting at 7 p.m. and ending around 10 p.m., having an extra show after 10 p.m. if there are enough people who show up. Each show lasts around 45 minutes with a 15-minute break in between to allow the presenter to set up for the next show.The event also allows anyone to go up the roof of Nevins Hall after the show and look through the telescopes set up there. Free tickets are handed out before the first show at 6 p.m. and cannot be reserved at an earlier date. Tickets are sold first come first serve.  For a schedule of coming shows, look here.

Previous People Poll: Where do you feel safe on campus?
Next VSU says “End It” to worldwide slavery