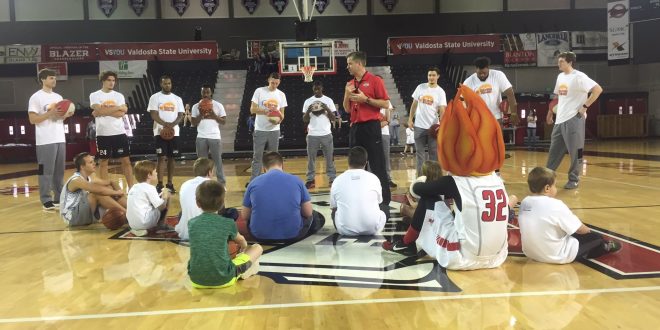 VSU Men's basketball took time out from preparing for their post-season run to host the inaugural Helfer's Heroes camp.

Tuesday night, the VSU Men’s basketball team won their Gulf South Conference Quarterfinal matchup against West Georgia, putting on a sharpshooting performance on the hardwood. Off the court, they seem to have had higher success.

On Feb. 24 at, head coach Mike Helfer and his team hosted boys and girls with special needs from grades 3-12 at the Complex. The event was held in the hopes of a creation of unforgettable memories for all its campers and the people that make up the Blazer basketball program.

“I just thought this would be a cool thing to do during our season because I wanted to reach out to kids that obviously have bigger challenges, bigger battles ahead than trying to win a championship in sports,” Helfer said. “It does not even compare.”

The program started with about 12 campers shooting around in the Complex with players of the Men’s basketball team. After 45 minutes of getting to know the players and coaches, the campers transitioned to the baseline where Helfer directed a series of drills.

Passing, jump-stops, and pivot moves were all taught during the session with Helfer. The series broke off into smaller sessions as each camper chose a player to work out with for the day.

One player was senior Jimmy Kodet being chosen by a participant named Ben, where Kodet was taught him different interior scoring options. Kodet’s time with Ben was heartwarming, as he felt highly relatable to the young camper.

Kodet was not alone, as Junior Tyler Johnson found the event emotional and touching for everyone that was involved.

“It’s very humbling, as you get to see a different perspective on life,” Johnson, who also works with special needs, said. “These kids are much bigger than basketball.”

Tim Parr, father of camper Logan Parr, reflected on his child’s social skill and how this event could help in his development.

“Logan does not do much of interactive stuff with other kids, he’s more of a loner to himself,” Parr, who traveled from Ray City, Georgia said. “This is a good opportunity for him to interact with people over his age.”

The opportunity for Parr to see his son work out with the players was life-changing. Other players felt the event was, as Junior Clay Guillozet reflected on having a day with kids who face battles every single day.

“Coming into the camp, they didn’t really know much about us. They just knew we played basketball here,” Guillozet said. “Getting to know about the kids and their story was really the biggest thing.”

Guillozet then placed himself into their shoes as young kids meeting athletes.

“I always looked up to older role models when I was growing up playing basketball and just life in general,” Guillozet said. “Hopefully these kids can kind of take some things from us on how we interacted with them and we can be role models for them as well.

Usually, camps are held over the summer when many sports are in the offseason, such as basketball. It is never too late to become a role model in the life of a child and Helfer felt this was the perfect time to do so.

“I wanted to do it during the season, when they could build a relationship with our guys today,” Helfer said. “Maybe they could come our game and watch our guys play and feel like they know them on a personal level.”

Johnson and Kodet are just a few of the players who wanted to leave a message for the kids that came and those who are facing the same disorders all over the world.

“Come out and have fun for a day and just be around a group of good people,” Johnson said.

Kodet followed with a message related to sports and overcoming obstacles.

“No matter what the disability is, you can always get better at sports,” Kodet said. “Just keep going and don’t stop because you are doing great.”

Helfer also left a message and described how the event came to be.

“The reason why I called it ‘Helfer’s Heroes’ is that those kids are really the heroes,” Helfer said. “What they are overcoming and the challenges they are facing, I am just proud of them for what they are doing so far. In my mind, they are the heroes.”