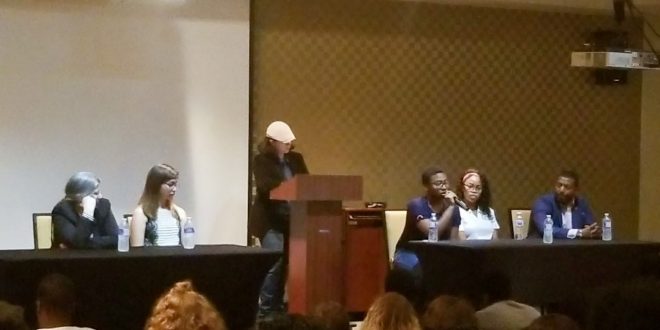 Panel Affirms Racial and Sexual Bias is Alive and Well

As disappointing and unsurprising as it is, racism and stereotypes are still extremely prevalent in everyday life, and the VSU campus is definitely not an exception.

This was highlighted in a panel called “How Comfortable Am I” led by Professor Andrea Ramirez, where she gathered a diverse cast of VSU organization leaders to discuss their experiences with prejudice at the university and in everyday life.

“We created this discussion to show what it’s like at VSU from different perspectives,” Ramirez said.

The five speakers invited to the panel were Dr. Laverne, a professor of Native American ancestry and one of the faculty of the titular program; Liz Garcia, representative of the Latin American Student Association; Ieshia DuVoe, representative from the Gender and Sexuality Association; Lauren Williams, political action chair of VSU’s chapter of NAACP; Derek Carter, professor of African-American studies.

While each group had a different experience, they all were discriminated against due to their status as a minority.

When asked about preferential treatment in regards to race, Williams pointed out NAACP and other organizations have been blockaded from organizing events and given inadequate space.

“As an organization, we have had to jump through like 12 other hoops that we noticed other organizations didn’t have to,” Williams said. “If we wanted to organize a simple march, we’ve been blocked by Student Affairs and the administration in general or they make it extremely difficult. Previous President Jasmine had the same issues. I have also noticed a difference in space. Many of the African American organizations are lumped together in one office. They have gotten better about it, but there’s still about four organizations to an office while others individual organizations have their own space.”

Dr. Laverne also added to the topic of racial bias, stating she felt more comfortable hiding her identity and felt as though her viewpoint would not be heard.

“I’m more white passing for someone of Native American ancestry,” Dr. Laverne said. “When I got hired for teaching positions, I felt it was necessary to not disclose that fact. It’s something I thought about when getting published. White researchers are more likely to get published because society still views Native Americans as uncivilized and our white counterparts know what they’re talking about.”

Next, Liz Garcia made several points in regards to stereotypes about students of Spanish and Hispanic descent.

“Many think it’s only Mexico, but there are so many other countries we hail from: Columbia, Spain and Honduras,” Garcia said. “Besides that, there’s also the common slurs like wetback. I’m glad we have the Latin Student Association because we’re so much more than that.”

In regards to gender, DuVoe expressed disappointment in the erasure of GSA and the lack of conversation that leads to the misunderstanding of sexuality.

“At events like The Happening, we’ve gotten a much better response by toning down our stance,” DuVoe said. “While I’m glad we’re getting some more positive feedback, it’s sad we have to resort to not fully expressing ourselves to get there. This does not help the situation when discussing sexuality.

Bisexuality especially is underrepresented and as a result misunderstood. And while there is more conversation about transsexuality, it’s not to where it should be because it’s so taboo.”

Predictably enough, this is even more rampant in the real world as well. Carter spoke about an experience where a colleague was shocked about his lifestyle, with his professional style of dress, his son in attendance of private school and his expensive car.

“He flat out told me that you’re different from our kind, being able to afford all of this,” Carter said. “I just looked at him in complete shock and tried to steer the conversation in a different direction. Then he tried to back track by saying we have white trash who work here too.”

Even worse, this type of stereotyping goes as far as upper management. Speaking about another company he worked for, Carter was shocked about job selection based on names.

“My boss told me that if the name looked slightly ghetto, I was to throw their application in the garbage,” Carter said.

Williams said it’s just not something you can control.

Your parents chose that name for you,” Williams said. “It makes me glad I have a basic name like Lauren, because it’s bad enough to have to work twice as hard to get your foot though the door, but to have to not even be considered because of my name?”

This saddest discrimination of all, however, is the prejudiced experienced by their own, a practice called internalized categorism.

“It’s so sad,” Garcia said. “The darker skinned people in my community are looked at as dangerous and lazy, and being paler skinned myself, I found myself feeling awful about it, but also feeling like I couldn’t relate to my own friends’ experiences.”

“I have noticed that colorism has not been rampant like that on our campus, but it still is in the real world, and it coming from your own people hurts,” DuVoe said.

The panel was not all doom and gloom. All the panelists pointed out that VSU and the world is still progressing, and the diversity and representation on campus is encouraging. However, the discussion was a sobering reminder that while we have come a long way everyone still has a longer way to go.

Previous Building better bridges: SGA hosts first ‘All Committees’ meeting
Next BREAK FREE FROM YOUR PAST AT THE VSU COUNSELING CENTER