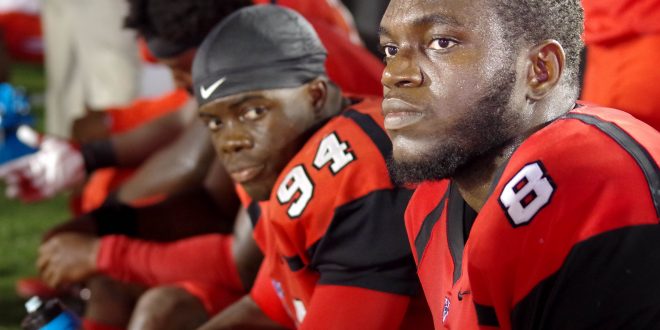 Jegede, along with former VSU cornerback Stephen Denmark, has impressed scouts at private workouts. Both are possible day-3 picks.

Instead of facilitating on the basketball court, the Nigerian juggernaut is now orchestrating the defense on the turf. VSU Blazers Senior Defensive End, Iseoluwapo Jegede, is the current team sack leader with 4.5.

Iseoluwapo Jegede hails from Lagos, Nigeria. The 6’6,” 280 lbs. mammoth of a man arrived in the U.S. in 2013 when he was 19 years old to play collegiate basketball.

Jegede explained his rough transition, having left his family back in Lagos.

“I miss them, but I focused on what I had to do,” he said. “It made it a little easier. The major difference is the cold weather and food over here.”

Picking up the sport of basketball in 2010, Jegede was able to land a spot on Victory Rock Prep School’s team in 2013.

After playing a season at prep school, Jegede continued his basketball career at College of Central Florida. He played 20 games for the Patriots and posted 6.5 points per game and 5.5 rebounds per game.

When he got to Florida, Jegede said he dabbled with the idea of playing football but never really took action to put it in place.

“I saw football and was like ‘I’ll try it out someday,’ but I never really knew I would really play football,” he explained. “When basketball couldn’t work out anymore, I just switched to football.”

Jegede only had one year of eligibility remaining after finishing prep school and junior college. He was introduced to football in August 2016 when he was connected to VSU’s Head Football Coach, Kerwin Bell, by one of his Central Florida coaches.

Coach Bell’s attention was captured because he felt that Jegede’s monolithic stature created the ability for him to be a natural at any sport.

“Even though he hadn’t played much football, we were going to give him a shot,” Bell said. “We knew we had a lot to work with physically, and now it’s just the matter of him learning the game of football.”

Coach Bell credited Jegede’s work ethic on and off the field that has played a huge part of his success.

“He has close to a 4.0 GPA and received his high school diploma at 16 back in Nigeria,” Bell said. “He’s always been a kid that has been a great and productive guy, and he puts in that extra work that it takes him to be successful.”

Jegede said football is his favorite sport at the time, but sometimes he misses basketball.

“When I go to the complex and I see them playing a basketball game, it brings back memories, and I just wish I could lace up one more time and go play,” he said.

Since having to leave his family, Jegede went back to visit Lagos for the first time during the summer of 2017.

Jegede generated a new family in every step since coming to the U.S. as past and present coaches and teammates along the way allowed him to live with them.

Jegede has been anchoring the defensive line with his leadership, and he has high expectations for his undefeated Blazers.

“I’m expecting nothing less than a championship,” Jegede said.

Previous Lady Blazers open season at No. 2
Next Coach Peacock Serves as Inspiration to Blazer Football