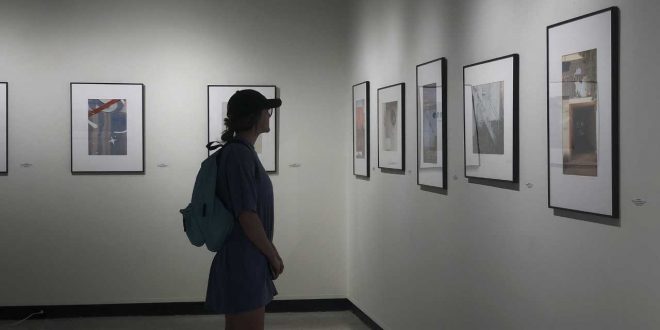 VSU’s Newest Art Exhibit Offers Something for Everyone

The newest exhibit in the gallery at VSU’s Fine Arts Building offers something for everyone. In the gallery is a photography series titled “Abandoned in Place,” featuring the work of photographer Roland Miller.

According to Miller’s website, “Abandoned in Place is a photographic exploration of the American space-launch and research facilities that played a crucial role in the early period of space exploration.”

What sets this show apart from other photography shows is that it showcases two different styles of photography: documentary style and artistic style.

“Photography professor Dominic Gheesling….thought this show would be very beneficial because it shows both [the] documentary style of photography, but it also shows a more artsy side where you’re just looking at the colors and the textures and the composition,” Gallery Director Julie Bowland explained.

The unique shot compositions and colors offer scenes art majors would enjoy, and the documentary style photographs are a style journalists and photojournalists would benefit from seeing this show.

The exhibit’s summary explains this best by saying “one of the unique aspects of ‘Abandoned in Place’ is the combined utilization of documentary and abstract approaches to the subject.”

The subject of the photographs in “Abandoned in Place” is the Space Race during the Cold War era of American history. This is one reason Bowland thought that it would be such a good show to bring to the gallery because it would “appeal to the space nerd in all of us.”

But even for the people who do not consider themselves to have a little bit of “space nerd” in them, this exhibit offers many things to be learned about and reflected on from this era in history.

The description of the exhibit says “A sense of the urgency of the space race is evident in many of the images … The structures depicted also recall the darker threat of nuclear war. Some of the images describe a future that could have been if the Cold War had heated up.” These elements of the gallery are ones that would appeal to history lovers.

“It makes me very happy to think that our show is reaching across disciplines. It’s not just for the art majors,” Bowland said.

She also believes that since this gallery bridges the gaps between many different disciplines, it encourages everyone, even community members, to come to the Fine Arts Building and see it and reflect on it for themselves.

For the people out there interested in entertainment, some may be wondering if the timing of this exhibit has something to do with the release of the new movie “First Man,” directed by Damien Chazelle and starring Ryan Gosling and inspired by Neil Armstrong and the first moon landing.

Bowman explained that actual dates could have something to do with this seemingly sudden interest in the space program.

While it does tie in with that major anniversary of the moonwalk, that was, however, not the intent of the gallery directors who chose this show. It was merely a coincidence, because they just liked the art in the show and thought students, faculty, and community members would enjoy it as well.

“Abandoned in Place” will be featured in the art gallery until Nov. 2 and everyone interested in space, history, art, and documentaries can go check out this exhibit in person.

For those of you who enjoy the exhibit this month, be sure to check out the Fall Senior Exhibition, which will feature work of senior art majors and will run in the gallery from Nov. 11 – Dec. 3.

For those who cannot make it to the gallery to see “Abandoned in Place,” they can check out some of the images on Roland Miller’s website: www.abandonedinplace.com.

Photo and Story by: Maria Sellers

Previous GOOGLE PIXEL 3 CAMERA TAKES IT UP A NOTCH
Next Two for two: Stacey Abrams returns to VSU