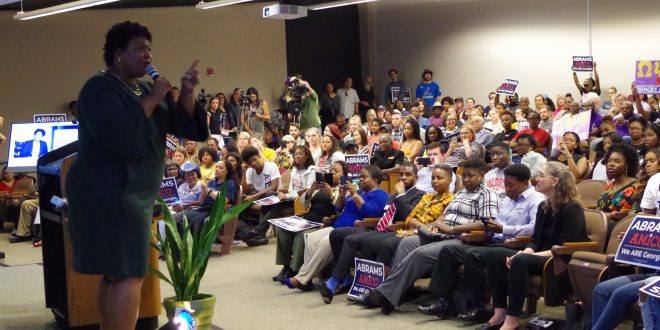 Stacey Abrams speaks to the entirety of the crowd telling them of the importance to vote and why they should vote for her. Stacey Abrams is currently on track to become the governor of Georgia alongside Republican candidate Brian Kemp, but only one will win come Nov., Election Day.

Chanting and “woo-ing” filled Jennet Lecture Hall as a crowd composed of students, faculty and community members of over 300 individuals vocalized their zeal for Stacey Abrams’ return to Valdosta.

VSU’s Young Democrats orchestrated the event once again allowing Abrams to engage with students and drill in the importance of voting.

The Democratic 2018 gubernatorial candidate stood front and center of the large crowd on Oct. 24, but not before District 177 Representative Dexter Sharper could prep the crowd for her arrival.

“Are y’all ready for Georgia to turn blue,” Sharper asked the crowd who responded with a resounding “yes.”

Abrams, however, had a different response for him and the crowd.

“In 13 days, we’re going to change Georgia,” she said. “I’m not just running for history; I’m running for the future.”

Abrams is currently on track alongside Brian Kemp to become governor of Georgia. On Oct. 23, both candidates got the chance to battle out their ideals at the Governor’s Debate.

Abrams said there shouldn’t be any misconceptions with either of their goals after it.

She told the students of discrepancies between Kemp’s words from the debate and what he’s been saying throughout his campaign. Putting it simply, Abrams said they just didn’t match up.

“My opponent says that if they are state law enforcement, then he’s there for them, but if it’s local law enforcement protecting us—our communities—he says it’s not his problem,” she said. “He’s made public safety the center of his campaign, but when I asked him very specifically ‘why isn’t the governor responsible,’ he said it wasn’t his job. If it’s not his job, then he shouldn’t get this job.”

Abrams stated her goals for Georgia to the crowd including providing a $10 million small business fund, investing in a $40 million green bank fund to invest in Georgia and provide 45,000 jobs, and making college debt-free in Georgia.

“I am the governor that will make that happen, but I need your help,” she said.

“Woos,” claps and a standing ovation immediately followed from the entire crowd, especially the students in attendance. As one of the students cheering, Sophomore Lauren Williams said hearing that was inspiring.

“I wasn’t expecting that energy that she brought out,” Williams said.

Williams wasn’t able to attend when Abrams originally came, but she said seeing her this time was incredible. She said it’s important as a supporter to give the same energy back as Abrams was giving to them.

“She needs to be uplifted,” Williams said. “She needs to know that as college students, as women, as boys, we are there for her. To me, she’s really making an influence, and she can make change for us.”

Abrams went on to speak more about her goals, but the point she really wanted to drive was for everyone to get out and vote.

“Voter suppression is real, and we need to vote early so we can figure out all the kinks,” Abrams said. “We do not win this election on Facebook, but door-knocking works.”

Sophomore Deija Roberts wasn’t going to vote this year, but after listening to Abrams, she said that she definitely will now.

“I didn’t know why I needed to vote,” Roberts said. “Coming today was definitely an eye-opener.”

Roberts originally wasn’t going to come to the event, but because of some “passionate” friends, she tagged along. Little did she know, more things than not resounded with her own ideals

“The things she talked about were important to me, and I didn’t realize that until I came out here and actually heard what she had to say versus what everyone else was saying,” she said. “I’m voting because now I understand why I’m voting and why I need to vote.”

Young Democrats President Matthew Banks said the organization’s purpose in bringing her back was just that reason: Inspiration.

“Anytime a candidate—a democratic candidate—comes to a ruby red area of the state like this, it’s fantastic,” he said. “[To show from] the energy here and the energy the first time means she’s connected with people on a whole new level that no one previously thought.”

Currently, there are only two weeks left until Election Day and early voting has already begun. For more information on registering or finding your poll location visit https://www.mvp.sos.ga.gov/MVP/mvp.do or download the GA SOS app.