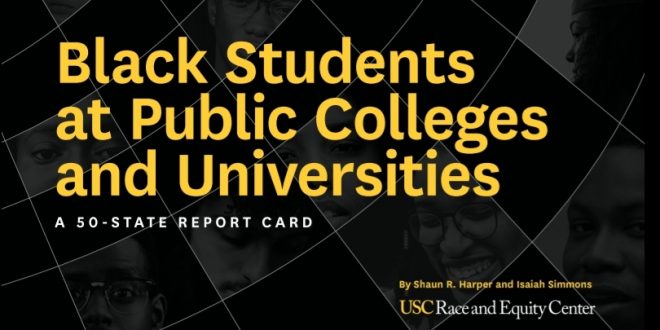 If  Valdosta State University received a report card on how it caters to its black students, which it did, it would’ve received three “As” and an “F.” Its equity index average, 2.75, is the highest in the state, but it’s failing grade reveals an issue black students are beginning to discover.

Five weeks ago, the University of Southern California’s Race and Equity Center put together “Black Students at Public Colleges and Universities: A 50-State Report Card” reporting on “the status of these students at every four-year, non-specialized, public postsecondary institution in the nation.”

Georgia received an average equity score of 2.16 percent, lying in the mid-range of the U.S.’s equity scores. Out of its 17 public institutions, VSU ranked within the top 10 in three of the four categories used in the study: Representation, Gender and Completion Equity.

For gender equity, VSU received a “B” with 62.1 percent women and 37.9 percent men in its black population, and a 5.8 percent national difference.

In completion equity, VSU received an “A” with a 35.4 percent black student graduation rate. This is a negative 2.4 difference from the overall graduation rate, 37.8 percent.

Though it may seem VSU is on a relatively good front, it failed with an “F” in the final category: Black Student-to-Black Faculty ratio.

Director of African American Studies Tameka Hobbs said though she hasn’t been here long, the dissonance was obvious.

Hobbs said that she thinks “it would go a long way” if VSU creates an association for faculty of color because it’d give them an umbrella to gather under; however, she believes overall it is an equity issue.

“This is a reflection of the forces of history and the choices that have been made about hiring,” she said. “If you have a student body that is 38 percent African American, they ought to be able to see themselves represented amongst the faculty.”

Mixed reactions came from the students. Some were surprised while others weren’t. Senior Clinesha Sims wasn’t surprised as she’s noticed the lack of black faculty for some time.

Sims hasn’t had a black teacher since she’s been at VSU. Coming from a life of always having black teachers, she said it’s thrown off her college experience and threw her sense of comfort out the window.

“It’s a disadvantage,” Sims said. “I feel like we need more black staff [because] it’ll make black students here more comfortable. [If] we have people that look like us teaching [they’ll] actually know what we go through on a day to day basis.”

Sophomore and National Association for the Advancement of Colored People Political Action Chair Lauren Williams could only say “oh my goodness” after hearing VSU’s ratio.

“That so true,” she said. “I didn’t even realize that until this year.”

Williams has attended VSU for two years and is only just now getting a black advisor. She said it made her realize more than just that she rarely sees black faculty.

“I think it’s sad [because] it’s a matter of we don’t have the same level of care,” Williams said. “I feel like black faculty, as far as students go, are really proactive. They make a huge difference whereas white faculty, maybe it’s class size or just race difference, are not working as hard for black students from what I’ve seen.”

Director of the VSU Office of Social Equity Dr. Maggie Viverette said VSU is aware of “the need to improve diversity,” but it is not the only school with this issue.

“As there are many factors that affect the complex effort of faculty recruitment, many schools in the USG (University System of Georgia) are experiencing challenges in their efforts to recruit a diverse faculty,” Viverette said.

Overall, only four Georgia schools carried a ratio receiving an “A” in the category. This includes Augusta University, Georgia College and State University, University of North Georgia and University of Georgia.

Note that three of these schools had a smaller population of black students.

Dr. Gerald Williams, director of Career Opportunities, said VSU is in talks of a solution to the issue.

“There have been many conversations about how to attract and retain more faculty,” he said. “However, I am not involved with that process.”

Viverette also said VSU is making “several efforts” to recruit a diverse faculty and that it’s in accordance to the President’s Strategic Plan, a multi-year strategy to realize his goals and outcomes.

According to Outcome 1.5 of the Strategic Plan, “VSU will attract, develop, and retain a quality and diverse workforce that promotes student success by forming a more outcomes-oriented training program for managers by spring 2019.”

Director of Student Diversity and Inclusion Sandra Jones has sat on a hiring committee to do what that outcome states. This committee just came from hiring new Director of Human Resources Jeanine Boddie-La Van, a black woman.

Jones said it’s VSU’s priority to bring in a diverse faculty not because something led to a lack of diversity but because diversity in students started increasing.

“Think about it: This is Valdosta, Georgia and our university was a white university,” she said. “The influx in diversity in our student culture just grew faster than our faculty on that end.”

Jones said VSU has to make a better effort to have representation for all students and is on its way toward it.

She currently sits on Educators for Equity, a group who tries solving the matter of bringing in diverse faculty. The group asks what it can do, but Jones said other issues arise to block diverse faculty from coming in.

“We have to ask the question ‘Why aren’t those people applying?’” she said. “A door can be opened, but we also have to make it something people want to come to.”

Besides bringing diversity, Jones said VSU must make itself welcoming to diversity. According to her, the Department of Student Diversity and Inclusion are trying to make some leeway in welcoming students first.

“Our strategic plan is leading us to make that also reflective in our faculty and administration,” she said.

The study gives its own solutions to recruiting and retaining black faculty toward its end.

“Institutions must go beyond simply posting job announcements on their HR websites and in the Chronicle of Higher Education,” it said. “Search committees have to be trained on bias, held accountable for producing racially diverse finalist pools, and expected to write position descriptions that amplify the institution’s commitment to diversity, equity, and inclusion. Aggressively disseminating ads through academic networks that include several black academicians also is required for success.”

As a part of the entire solution, the study also says that white professors should read the study, discuss it, and begin collaborations with “black colleagues and other faculty members of color” to start correcting “troublesome experiential realities” or rather, bias.

“Anything short of this will guarantee perpetual imbalances in black student-to-black faculty ratios and high turnover rates among black professors,” the study said.

Written by Bryce Ethridge, News Editor. Photo and graphics courtesy of the University of California’s Race and Equity Center.