Home / Sports / The Blaze at Baze’ 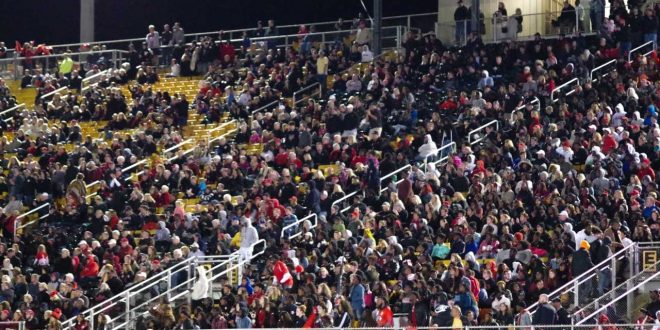 10,588 fans were in attendance for the Blazers versus Wolves game on Nov 10.

The Blaze at Baze’

We did it, Blazers. A cold November evening and 10,588 people later, Blazer football held up their side of the bargain, snatching the Gulf South Conference crown and the Peach Basket from the stiff competition in West Georgia.

Believe or not, the players noticed your support. The type of support I saw from the audience at Bazemore-Hyder Stadium is something that I expect to see on a weekly basis. This should be the standard at every game and not just the rivalry games.

Quarterback Rogan Wells gave the 12th man props, which motivated the Blazers even more to pry the win away from Wolves.

“When we ran out of the tunnel, I looked up, and I couldn’t see any of the yellow bleachers. It was wild,” Wells said.

Blazer fans rocked the Baze with their immense cheering that just sat on the Wolves, breaking their concentration and composure.

I even witnessed a fan in the bleachers, who talked so much trash throughout the game, that he eventually got a West Georgia defender to respond to his heckling. That’s the type of power you have.

This was the most school spirit I’ve seen in all my time at VSU. So many students came out on Saturday that it was standing room only before the game even kicked off.

From the Fire Pit, to the students, to the players, everyone came out and did what they were supposed to do on every single Saturday.

Head Coach Kerwin Bell was delighted with the fan turnout.

“The excitement and noise hyped our guys up in crucial situations,” Bell said. “Our fans know football and know when to get too loud, and they were spectacular tonight.”

Now we know what we are capable of. It’s possible to pack out the stadium. Now, it’s showtime. The playoffs are approaching, and if you want the Blazers to get the ring, it’s imperative to come out and support throughout their homefield advantage during the postseason.

“I think we need a technology hub that students and young adults in the area ...