Home / Sports / The Blazers ride is far from over 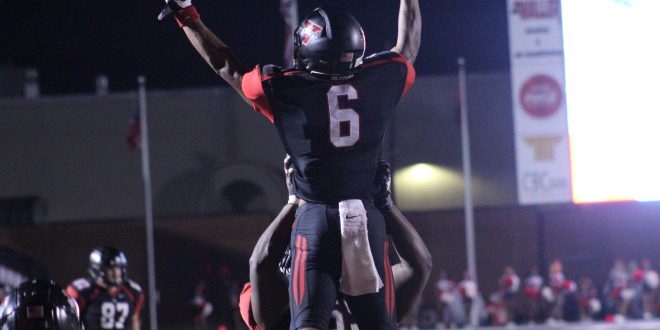 The Blazers will need to defeat Bowie State in order to progress to the next round of the NCAA Divison II playoffs.

The Blazers ride is far from over

They did it like I said they would. 10-0. GSC Champions. The Valdosta State Blazers ran the table after their monumental victory against West Georgia, where over 10,000 fans watched the 47-31 thriller.

However, their mission is far from complete.

“We still haven’t hit our peak! I hope you know that,” Head Coach Kerwin Bell told his players right after their win over West Georgia. “There’s a lot left on this road we’ve got to climb.”

That road they’re climbing ends in McKinney, Texas. Where the national championship game will be played on December 15th.

It’ll take the Blazers four more wins to get to the grandest stage of them all and be crowned champions. The first win needed to get there will be up for grabs this Saturday as the Blazers play against Bowie State at home.

VSU is the No.1 seed in the Super Region Two and is coming off a first round-bye for the NCAA Division II Football Championship. During the bye, Bowie State faced West Alabama in the first-round last weekend and won 41-35 behind quarterback Amir Hall’s 360 passing yards.

Bowie State’s success has been reliant on their passing attack all year long, so it’s safe to assume that the Black Swarm’s secondary will be tested come 1 o’clock this Saturday.

Hall attempted 48 passes just last weekend against West Alabama and has over 3,800 passing yards on the season. He’s an experienced senior quarterback that knows how to air it out, but he’s also thrown 9 interceptions on the year, and the Black Swarm is licking their chops at that.

“I think our defense matches up pretty well,” said Blazers’ senior defensive back, Raymond Palmer. “I like our guys over their guys any day of the week. They got some guys that like to stretch the field, so we’ll be prepared and ready to challenge them every play.”

VSU’s Black Swarm has no familiarity with this team like they do with GSC rival West Alabama, but there’s still no need to fret. This defense is more than ready to play against the likes of Bowie State, a team that averages 325 passing yards and just 106 rushing per game.

The Blazers have 38 sacks as a team and won’t allow Hall to get comfortable in the pocket to make big throws. Yes, Hall is mobile, sort of, but this defense is no stranger to versatile quarterbacks, and Bowie State’s non-existent running game makes their offense even easier to counter.

Despite their one-dimensional approach on offense, their defense is no joke. As a team, they have 35 sacks, 13 forced fumbles, and 10 interceptions. They’re full of hunters looking to force a turnover and are led by two lethal pass rushers in Joshua Pryor and Derrick Tate, they’ve combined for 16 sacks this season.

But like I’ve said, this Blazer offense is unmatched. It’s the candy store, everything is good about this offense from top to bottom. Bowie State just doesn’t have enough on their roster to matchup against VSU, plus how do you prepare for the best scoring offense in the nation?

Bowie State will be a good opponent to break the postseason ice for most of VSU’s players as they haven’t played in a game of this magnitude. The key for Valdosta to win this game is to simply play their game and handle business like they have has all year long.

This playoff matchup will take place in Valdosta at the Bazemore-Hyder Stadium this Saturday at 1 p.m.

The winner of this bout will play the winner of Wingate vs Lenoir-Rhyne in the following round.