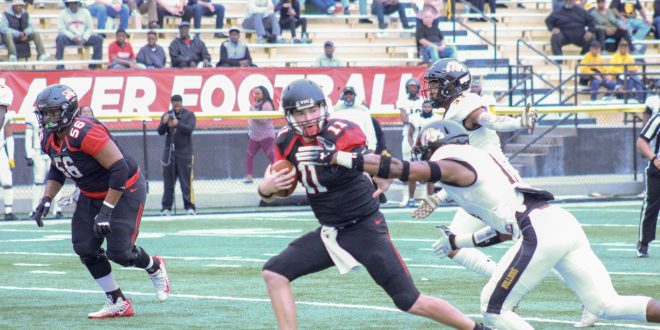 After a 66-16 win over Bowie State undefeated Valdosta State Football feels like they can't be beat.

What many thought would be a nail biting shootout turned out to be another run of the mill game for the undefeated Valdosta State Blazers.

VSU advanced to the NCAA Division II quarterfinals after their 66-16 victory over the Bowie State Bulldogs.

The first quarter was a slow one as VSU seemed to have just rolled out of bed, still full of Thanksgiving dinner. Bowie State took all the momentum and scored 10 points before the Blazers even got on the board.

VSU eventually worked off the rust and finally got on the board in the second quarter after a Jamar Thompkins touchdown run. Then in typical Blazer fashion they scored again, and again, and again.

“Once our offense gets started it’s hard to stop us,” Thompkins said. “Rogan throwing deep passes, me and my running back group handling on the field, and the O-linemen taking care of everything in the trenches, we can’t be stopped.”

The second quarter was not kind to the Bulldogs offense either. The Black Swarm got a jolt of energy from defensive back Stephen Denmark’s pick six early in the quarter and gave the Blazers their first lead of the game. After that score, they never looked back.

At halftime the score was 21-16 in VSU’s favor. Bowie State was down but not out, they had more total yards of offense with 222 yards to VSU’s 215.

But like all season long, the Blazers flipped the switch after the half and the beatdown ensued.

At this point, they were purely demoralizing the Bulldogs and you could see it on their faces.

The score was 38-16 heading into the fourth and the Blazers continued to punch the gas. With 4:31 left in the final quarter, VSU was in charge 52-16 and it was clear that the game was over, but Head Coach Kerwin Bell wasn’t done.

The Blazers recovered a botched punt attempt by Bowie State at the 6-yard line with 2:59 left. VSU ran the ball three straight times and on 4th and goal, backup quarterback Ivory Durham put the icing on the cake. Durham trotted in the end zone with ease to put the Blazers up 50 with just under a minute left in regulation.

“Those guys have depth, they played maybe two or three guys at quarterback and all three of those guys can play football,” said Bowie State Head Coach Damon Wilson. “The coaching staff does a great job at recruiting and developing that depth, that’s big at this level.”

Following this win, the Blazers will play against Lenoir-Rhyne in the NCAA quarterfinals next Saturday, December 1st at Bazemore-Hyder Stadium.

Previous The Blazers ride is far from over
Next Column: Will the Blazers’ fire be extinguished?