Home / Sports / Column: Will the Blazers’ fire be extinguished? 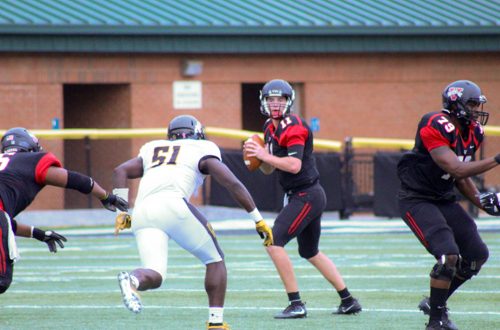 The Blazers will host Lenoir Rhyne on Dec. 1 at Bazemore-Hyder Stadium in the NCAA Division II quarterfinals.

Column: Will the Blazers’ fire be extinguished?

Leading up to the last two games for the Blazers, it seemed that they had all the cards stacked against them.

It took the Blazers to actually beat West Georgia for them to jump them in the NCAA Division II rankings, despite proving they were the better team statistically.

The Blazers showed up and showed out on a national platform to put the everyone in D2 on notice that they were for real.

Then came the playoffs.

I nearly forgot that the Blazers were playing because all I was hearing about was Bowie State Quarterback, Amir Hall and his successful collegiate resume.

But the Blazers put that to rest real fast, muzzling the Bulldogs, 66-16 in the second round playoff game.

The Blazer offense just has an abundance of weaponry that cannot be halted.

We already know about Rogan Wells and the magic that he can do.

The Blazers also have two-heads in the backfield in Jamar Thompkins and Seth McGill, who combined for 1,640 rushing yards and 13 touchdowns through 11 games.

Once teams get caught up on handling them, you have a plethora of receivers who break a big play at any time.

Gallimore, Saunds, White, Benjamin, are just to name a few. These four won’t necessarily have a big game due to the Blazers having so many options, but leave them open, and they will take it for six, as they all combine for 25 receiving touchdowns on the season

Looking at the playoff bracket, the only team who could keep up with the Blazers’ scoring is Super Region 4 number one seed, Tarleton State. The Texans average 47.9 points this season.

They lean heavily on their rushing game as they have two 1,000 yards rushers this season.

Though the Blazers defense give up an average of 334 total offensive yards per game, their long, drawn out possessions ends with them forcing a punt or turnover. Defensive backs Stephen Denmark, Raymond Palmer, and Ravarius Rivers all generate a No Fly Zone for opponents.

Paired with the secondary, the herculean Iseoluwapo Jegede and Thomas Incoom both pose a threat for offensive lines, terrorizing them with their size and strength, combining for 7.5 sacks.

I don’t see anyone stopping the Blazer train. It is just their season. There’s no reason the Blazers shouldn’t be hoisting the trophy on Dec. 15 in the Lone Star State.