Home / Sports / What’s next for the Blazers? 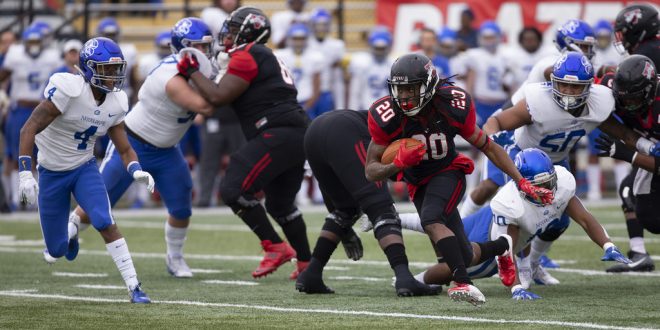 The Blazers are looking to hire a new head coach as early as next week.

What’s next for the Blazers?

The Blazers find themselves in limbo following their Division II National Championship against Ferris State. Three of the coaches leading the team in VSU’s first undefeated football season have pursued careers elsewhere.

Defensive Coordinator Danny Verpaele has moved to Kennesaw State to coach the defensive backs for the Owls.

Now the search is on as the Blazers face uncertainty.

Losing these coaches could be pivotal to the recruiting class. With a shortage of coaches and signing day only three weeks away, players may back out of their verbal commitments.

Luckily, the Blazers are young. Having a slight drop off in recruitment for a season may not hurt them as it would a top-heavier team.

I could be wrong, but it isn’t far-fetched to assume there’s some type of turmoil in the football department. The way these three coaches took off in short order after winning a Natty in such a dynamic and dominating fashion wasn’t expected.

But then again, it’s a blessing and a curse when you win a Division II National Championship.

Yes, you may get the exposure, but you must also acknowledge that Division I athletic departments will be chomping at the bit to prowl on the D2 coaches and players.

So, what’s next for VSU?

They must hire from within or enter the coaching carousel to bring in a new head coach, defensive coordinator and offensive line coach.

Players will then have to win over the new coaches. If some decide to transfer from VSU, it shouldn’t come as a surprise. After all, positions will not be solidified with an overhaul and a probable new system.

Next season will be a test for the Blazers.

But it could also be one of the their most storied seasons yet. Even more than last season.

Although it could come with a bit of growing pains as the coaching staff and players become familiar with one another, I feel that they still have a chance to repeat as national champions.

For the good or the bad, it will be a hell of a season for the Blazers.