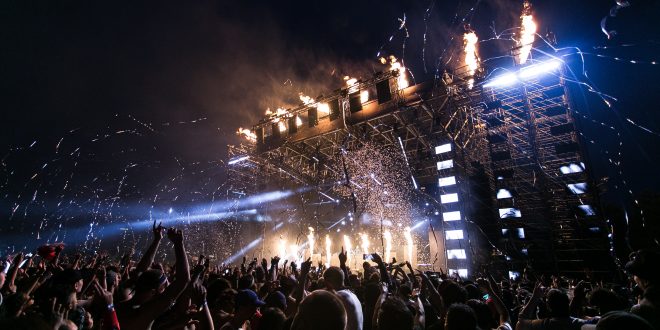 Between super models, beautiful beaches and amazing big name acts, the Fyre Festival was presented as the hottest new music festival, an even more exclusive, prestigious, luxurious and expensive festival than Coachella. It was created by entrepreneur Billy McFarland and rapper Ja Rule, and it ended up being one of, if not, the most notorious scam of our generation thus far.

While both the Hulu documentary “Fyre Fraud” and the Netflix documentary “Fyre: The Greatest Party That Never Happened” are vastly different in their own rights, the general premise was the same: tell the story of the disaster that was the Fyre Festival.

There are many elements as to how this music-festival-turned-fraud case unfolded, but it basically began when McFarland and Ja Rule got the idea to make an app where people could book talent straight from their phones. To celebrate that, they decided to have a music festival.

The music festival was going to be held on a beautiful private Bahamian island. So, to market this festival, McFarland and Ja Rule flew top super models, such as Chanel Iman, Hailey Baldwin-Bieber and Bella Hadid, among others, to this beautiful island and paid them thousands of dollars to shoot promotional videos and to post about the festival. They also recruited top public relations and marketing people to market this festival.

After all the promotional videos had already been posted, things started to fall apart. The festival bookers weren’t able to get the island they wanted. They couldn’t secure the luxury villas they charged people thousands of dollars for. On top of that, a host of many other problems arose.

They were unprepared for the amount of people they had coming but still did not cancel. These problems caused things to turn into a scene that would be in a post-apocalyptic survival thriller.

That is just a very basic explanation of what exactly the Fyre Festival was, which both the Hulu and Netflix documentaries did an excellent job explaining. Both documentaries told the story, but each told it differently.

Staying true to its name, the Hulu documentary, “Fyre Fraud,” did a better job at pointing out just how fraudulent this music festival was. The documentary also pointed to McFarland as a scammer and con artist throughout the whole film.

It started with a backstory on McFarland and some things about his childhood, including a story about his first-ever scam back in grade school. This documentary was well informed and used a wide variety of sources to get the fraud idea across. Those sources ranged from festival attendees to marketing people to a professional psychologist to McFarland himself.

The testimonies these sources provided are what really painted McFarland in a negative light, as they made it seem like he did it all intentionally and convinced the audience that they all had the idea it was fraudulent before the festival even happened.

Hulu’s documentary, however, did offer some thought-provoking and excellent points about today’s society, driven by social media, influencers and all things superficial, whereas the Netflix documentary hardly touched on this.

“Fyre Fraud” pointed out court documents, the specific amount of money that had been scammed from festival goers and went so far as to predict that McFarland will be scamming again. After he finishes his six-year prison sentence, that is.

As for “Fyre: The Greatest Party that Never Happened,” the tone was vastly different. This documentary pointed to McFarland as a scammer, but it wasn’t until the very end. In fact, this one took a slightly different approach to telling the Fyre Festival story.

While this documentary was also well informed, it used the same few sources throughout the entirety of the film. It also failed to provide as much background information on McFarland’s life as a whole.

The key difference between the Netflix documentary and the Hulu documentary is the way they portray McFarland. Netflix makes the Fyre Festival seem more like an unfortunate accident that was the result of poor planning and things continually going wrong. It does not point to Fyre as a deliberate scam and McFarland as a con artist as much as the Hulu documentary does.

When it comes to deciding which one to watch, it will simply come down to a matter of preference. If someone wants to see a well-informed documentary about the extent of this fraudulent festival, Hulu’s “Fyre Fraud” would be the way to go. To see a more in-depth look as to how the festival played out and what all went wrong with the planning of it, Netflix’s “Fyre: The Greatest Party That Never Happened” would be the one to watch.

No matter which film sounds most appealing, both films accurately and thoroughly tell the story of the Fyre Festival in a way that is informative and entertaining.

Previous Review: Kingdom Hearts 3 lives up to the legacy
Next Townsend’s defense extends off the court