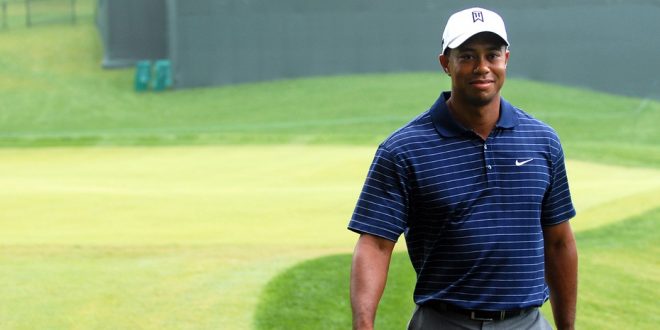 After winning his fifth Masters and 15th major in his career, Tiger Woods could be back for good.

I was born in ’95, too young to remember Tiger’s record-breaking performance in ’97, not quite old enough to fully appreciate his dominance at Pebble three years later.

Still, I had grown up in the “Tiger Era,” an environment where it was Tiger vs. the field, red Nike shirts, and a tiger head cover over my driver.

Having a PGA Tour event in town, Woods made the trip to TPC Sawgrass every year, young boys and girls priding themselves on just getting a glimpse of him, bonus points if you could attain his autograph at the practice round on Tuesday.

It was there on the famed Island Green where Tiger Woods holed a downhill, 60 foot-birdie putt, with NBC’s Gary Koch calling it “Better than most” that Saturday in 2001.

In the 2005 Masters, with a one stroke lead, Woods hit his tee shot over the green on the par 3 16th.  At that moment, all conventional wisdom pointed to Chris DiMarco now having the momentum after his ball lay on the green some 15 feet away from the pin.

But this was Tiger we were talking about, and after scientifically examining the putting surface, he landed his chip at the perfect spot, trickling down the slope until it stopped just shy of the cup.  Then, as if the crowd had willed for it with its eruption, the ball fell in.

“Oh WOW! IN YOUR LIFE HAVE YOU SEEN ANYTHING LIKE THAT!” Verne Lundquist exclaimed.

The call that encapsulated Tiger more so than any other though?

18 at Torrey Pines. Why? Because with perfect brevity Dan Hicks described what everyone and their mothers were thinking: “Expect anything different?”

Despite having an injured knee, hacking it out of the rough to get it there, and dealing with the resulting slick, 12-footer, did anyone in their right mind even dare betting against Tiger?

Put in a different way, when Phil stepped on 18 tee two years before at Winged Foot, all he needed was a par to win.

Just face it: you weren’t sure whether or not Lefty would win or if he would fall short somehow.

When Tiger had the lead on Sunday at a major, not only did you know he would pull through, but even the slightest of conceptions of him falling short never entered your mind.

One could argue that Jack Nicklaus has accomplished more, particularly in light of his still-record 18 majors.  He sustained a level of success for a longer period of time.

If he could be likened to Kareem Abdul-Jabbar, Tiger was our generation’s Jordan.

The argument is largely this: that Kareem faced an older Wilt, Moses, “The Dream,” and a bevy of other great big men throughout his career.

Those who played against Jordan in 90s tend to be less revered, but defenders will say that the greatness of “His Airness” was that he brought fear into any possible player who approached him.

Just ask Clyde Drexler how the 1992 Finals turned out.

It was Jack who dethroned “The King,” Arnold Palmer.  He competed against Arnie, Player, Watson, Trevino, Seve etc.

In a sense, he played in a smaller “league” than Tiger, who you could argue had to face deeper, wider competition with the game’s growth, although some historians may say that doesn’t necessarily mean better.

Same for Jordan.  His NBA had more teams than Kareem’s, but for a kid growing up in the 90s, all they grew up watching was Jordan winning time after time.

For me, it was Tiger time after time.

Sure, there was Phil, Ernie, Vijay, and others, but the title of the game’s best was never in question just as it had been for Jordan in the 90s NBA.

With that being said, for a kid who has grown up only knowing Tiger, wouldn’t it be natural for that kid to yearn for him to come back?

With Tiger delivering virtually every time (14-1 when leading before the final round of a major), barring that one flukey loss to Y.E. Yang at the PGA, how could one truly expect someone of my generation to simply turn to another player and believe it would all be the same?

Heading into Sunday, Tiger, apart from not having Jack’s 18 major wins, only had one thing  missing from his résumé: a comeback at a major championship.

In several ways, Tiger’s victory didn’t make sense; he wasn’t ahead, he didn’t have that specific shot that stood out like in 2005, nor was it one of his record-breaking demonstrations of dominance.

Instead, it was perfect in that he did the one thing he hadn’t done before, while still possessing the aura of old, intimidating his playing partners like he used to, letting them make the mistakes when it was time.

He recovered from wayward shots, reminiscent of Hagen, winning on the final day with Walter’s match play mentality.

He showed that he could last like Nicklaus, despite the long journey it took to get there.

His comeback was the closest thing to Hogan’s, a man who survived a greyhound bus crash, only to return stronger than before.

Perhaps more importantly, Tiger, with his victory this week at Augusta, won the hearts of the patrons like Arnie had with his Army.  People who wouldn’t normally be allured, were enthralled Sunday.

For Golf, could one possibly conceive of anything better?