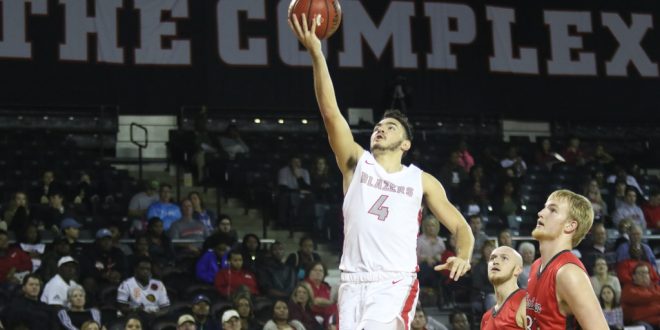 VSU Blazers guard Clay Guillozet goes up for a lay up against Christian Brothers last season at the VSU Complex.

For the first time in his three years at VSU, Clay Guillozet is the guy.

Guillozet was overshadowed primarily by the three-point tandem of Beau Justice and Winston Morgan, who have both since graduated last season. He has received respect from the Gulf South Conference, receiving All-Conference first team honors.

Guillozet finished last season averaging 13 points, seven rebounds and two assists a game on the No. 1 team in the GSC (24-7). He was one of five Blazers to average double-figures.

Guillozet remains adamant about improving his game and doesn’t let praise get in the way of progress.

“I stay working no matter what,” he said. “It doesn’t matter what comes, I know what the season holds for us and we are excited to get started as a team. I just know how hard we have to work for the GSC regular season championship.”

The foundation has been set to begin the journey.

With veterans like Guillozet, Bryce Smith and Darrel Jones, Head Coach Mike Helfer has a starting point to rebuild the relatively new roster.

Justice was the face and undisputed leader of the squad last season. The torch has been passed to Guillozet, a silent player who leads by action.

Helfer said Guillozet is ready for the role.

“Clay has done a great job with leadership,” he said. “I think he is embracing that role, but Clay just needs to be Clay. Clay is the first-team GSC because of what he does. He does so many little things that it’s so hard to keep track of them all.”

Aside from that, Helfer is confident that Guillozet is the right guy for the younger Blazers to rally around.

“I don’t want him to try and be somebody else,” Helfer said. “Just be a better version of what he has done for two years and I think that’s how he sees it. I am looking forward to a big year from him.”