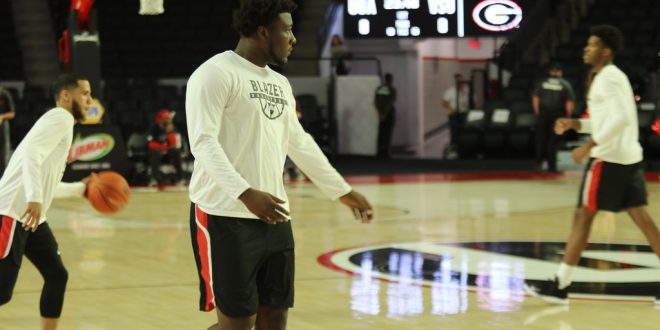 If you attended either of the Blazers first two games this season, you probably had to do a double-take at Darrell Jones.

Jones, a senior forward, trimmed down some weight in the offseason, which has unlocked new dimensions in his game.

“I lost about 20 pounds,” Jones said of his weight-loss. “I was eating better. It was really my eating habits. I was always active in basketball, but it was my eating habits that needed a change.”

Jones’ front court partner, Bryce Smith, accompanied him during the offseason for workouts.

It really helped and he lost a lot of weight. You can see now that he’s in shape. He can move better, he can dunk the ball better.”

Against the Golden Rams, Jones had an electric evening, scoring 21 points and grabbing 11 boards. Consider this the first of many.

“My goal is to average a double-double this season,” he said after the game.

“I feel a lot more active [on the court],” Jones said. “My body feels a whole lot better. Even my breathing. Just everything feels better for me.”

Head Coach Mike Helfer loves the new-look Jones, as it has thrusts him into more of a leadership role for the Blazers.

“I think him trimming the weight is allowing him to play more minutes, maybe play a little bit more aggressive because he can,” Helfer said. “I am proud of him. He is taking ownership on our team.”