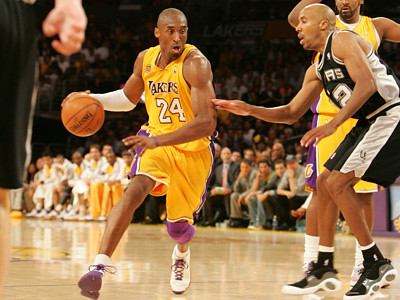 Kobe Bryant, his daughter and seven other passengers passed away from a helicopter crash on Jan. 27. He won five championships with the Los Angeles Lakers.

Dear Kobe, A eulogy to the man I’ve never met, but who I’ve known my entire life

Mr. Bryant always felt insincere, you were always Kobe to the masses. It was bigger than basketball with you. You changed everything we value in sports.

You were the man I never met, but knew my entire life. For many middle to late 1990’s kids, you were their icon. We shouted your name when shooting at a trash can or laundry hamper. We wanted to shoot a fade-away like you. We wanted to be cool, like you. You were the perfect post-Michael Jordan superstar. In every enigmatic and frustrating way.

You were the first internet superstar. As the web grew, highlights of your reverse dunks, fade-away jumpers and game-winning shots were almost on everyone’s poster, computer background and YouTube search history.

Basketball is different from most sports. The players are the marketable trait, even more than the teams. People not even from Los Angeles adored you. Kobe was the brand, and the Lakers were second. This movement was started by you and your generation. You took the branding to another level, and made yourself the face of one of the biggest organizations in all of sports.

You stood out in a league that was desperate for a star, after Michael Jordan and before LeBron James. In a league with Steve Nash, Dirk Nowitzki, Allen Iverson, Vince Carter and Tim Duncan, you were the guy Kobe, and you were loved and adored by Los Angeles. Your legend continued to grow.

You pushed the league to a global scale. You were one of the first basketball icons to cover the entire globe. Japan, China and Europe all think about you as one of the greats. You had that impact.

But it was bigger than fame.

I struggled with you as a player. First off, I hated the Lakers. I hated the team, the colors and hated that you kept winning and kept on being successful. In a player driven league, my favorites were LeBron James, Steve Nash and Tim Duncan. LeBron was trying to follow in your shadows, Nash and Duncan your biggest rivals. It made you the ultimate heel in my head. Big, bad Kobe Bryant, with a tenacity to beat everyone in his path. You kept winning. Five times, to be exact, you stood at the mountaintop, king of the game.

When my argument for the generational “GOAT” came out in my class, I argued that you were George Gervin with five championships and a better public relations team. That Duncan deserved the title. But the disservice that provides to you had no limits. Fans revered your ability, and the highlights stood out over the statistics. Your moments stood above any Basketball Reference page. Your peers, and the players that followed you understood your greatness, and that’s what puts you near the top of your game. Sometimes, the statistics don’t matter.

But it was bigger than basketball.

You taught a generation valuable lessons. Michael Jordan was the underdog story. LeBron was the pure natural ability. You, Kobe, were the epitome of hard work conquers all. You broke down film of legends, worked on your game tirelessly. You created an entire campaign on your work ethic, dubbed the “Mamba Mentality,” off of your nickname.

If anyone asked about the hardest working player in basketball, it has always been you. You’re revered in basketball circles for your tireless mentality, your bulldog like approach to the game that showed on the court. You were a bulldog at your best, hellbent on beating the opponent in front of you. You embarrassed many professional athletes.

But it was bigger than the “Mamba Mentality.”

Your humanity shined through on the basketball court. You were never afraid to be you, for better or worse. You almost lost your team the championship in 2010. You shot 6 for 24 in Game 7 of the NBA Finals, but never apologized. You continued to attack the basket, and you hit some of the biggest shots to win the title. Your ability to be yourself, no matter the consequences stood out to everyone.

Athletes are generally treated like Gods. You live long enough that the allure wears off, as they get older. But we never had that with you, and you will always be remembered in that God-like status. But your power was in your humanity.

I struggled with you as a human being. The rape allegations against you in 2004 still loom large. You apologized later, in the wake of a civil case. You threw your friend Shaquille O’Neal under the bus, according to the transcripts of the incident. It was a moment that continues to be a black mark on the Black Mamba. You were the man so intense on the court, but so sincere off of it, nobody knew what to believe.

The rape case and civil settlement deserves a moment. I even thought to myself at one point of what that woman must be feeling now. You may not be that guy, but it is a moment in your life still in my head constantly when your name comes up. Unfortunately, we take the good Kobe with the bad Kobe, and we always want to remember not just the basketball player you were, but the human you were. You were just like us, grinding away at your craft, and making mistakes just like everyone else.

You were a man who was focused on being a parent, raising four young girls. Teaching them to be strong woman, and even strong basketball players, in the case of Gianna Bryant. Everyone mentioned how much you cared about being a father, and being a mentor. It showed every time we saw you court side with your daughter Gianna, and the way you approached the young, up and coming talent in the league. You cared about being that voice to guide them and inspire them. You cared about your impact.

You helped grow the game in the WNBA and women’s soccer. You were one of the first figures to get behind the game, recognize the talent and stand behind it as a fan. You wanted that impact to resonate with your daughters and your fans.

And for you Gianna, you were next. I couldn’t help but smile the first time I saw a video of you driving baseline, backing down the defender, spinning and hitting the fade-away jumper. It was so casual. It was so much like your father. I was beyond excited to watch your career blossom over the coming years. I’ll be thinking about your family through all of this.

But it was bigger than teaching.

You were an icon to so many, Kobe. You taught us lessons of basketball, stardom, humanity and work ethic. You fought hard to leave a legacy that will rival anyone else’s. You wanted to be the next Michael Jordan. You wanted to inspire generations of basketball talent. You took on the pressure of being the center of attention.

And you did it. You accomplished all of that in a spectacular 20 year career, all in Los Angeles, playing for the historic Lakers. Many people picked up a ball for the first time thanks to you. That was your impact.

So thank you, Kobe. For inspiring millions, showing hard work can always pay off, and being a human as well as an icon.

It was always bigger than basketball.

Previous Pop Addict: Get the Tea with TJ!
Next Remembering Kobe: Everyone has a little bit of No. 24