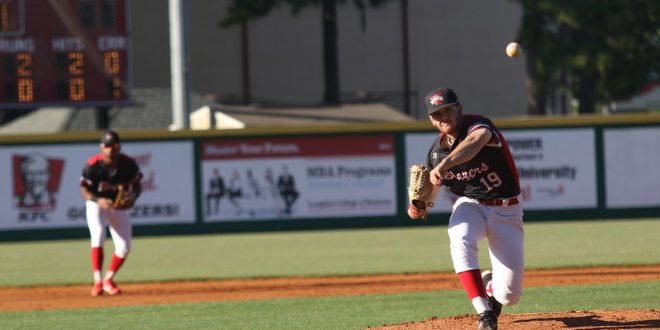 Alex Tyson is a part of a deep and talented Blazer pitching staff for the 2020 season.

Blazer baseball looking to build off of last season

The Valdosta State Blazers made it to the NCAA South Region II tournament last season. This season, they look to keep the momentum going in the right direction.

While the Blazers lost a bunch of talent at the plate, Head Coach Greg Guilliams is confident that players who had starting roles last year will step up to be the new leaders.

Players like DJ King and Josh Broughton, that were common to have hot bats last season, have left big holes in the lineup. The now seniors Logan Stephens and Jowenrick Daantji will look to take advantage of starting where they left off at the plate.

Guilliams also anticipates new players coming in from recruiting and junior colleges to help fill in the holes in their offensive game plan.

“It’s a combination of recruiting, some of the players we brought in will help us offensively,” said Guilliams. “I also think some of the guys that played last year are better this year. That combination is what it’s going to take for us to be better offensively.”

Although the batting is in a minor rebuild, the Blazer bullpen will be loaded with talent. Players like Zach Blankenship, Tristan Cone and Cooper Cain highlight a crew that accrued over 400 strikeouts last season and 100 over the Gulf South Conference average.

“I think we have a good staff,” said Blankenship. “A lot of us throw strikes against a mix of hitters, so I’m excited for the season.”

The Blazers lost four pitchers from last year’s squad but are still stacked with talent in a league that is known for good-quality pitching.

“The league has a lot of dominant pitching,” said Seth Caballes,junior catcher. “I transferred my sophomore year, and I learned that [they throw] a lot of curveballs.”

Last season, the Blazers earned a GSC Championship tournament berth after going over .500 in the conference, going 32-23 overall. They were able to get upset wins over Mississippi College and Alabama Huntsville to get to the championship game and a spot in the NCAA South Region tournament.

To make it back to the national championship tournament, they are going to need to ride on the talent of their pitchers while their offense develops with new players. Last year’s junior class made up most of the team, so their experience will make great leaders for the recruits and transfers.

Coach Guilliams understands the obstacles that lie ahead and isn’t worried about development.

“What I’m most excited about is some of our transfers,” said Guilliams. “[These are] guys who had a lot of experience where they played before, and they are going to hit in the middle of our batting order and really make a difference.”

The 2020 regular season starts Friday, Jan. 31 with a three-game weekend series hosting the Embry-Riddle Eagles at home. The Blazers are 5-2 against the Eagles when playing them in the first week of the season. The first game starts at 5 p.m. at Billy Grant Field.