Home / COVID-19 Updates / Column: VSU graduation should be postponed, health should be priority 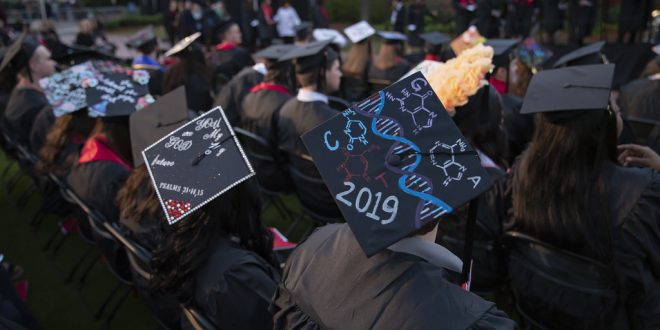 The undergraduate ceremony was set for Saturday, May 9. Also, the graduate school ceremony for May 8 will also not be held.

Each day the number grows.

And, with each day, so does the pain.

The coronavirus pandemic has infected around 220,000 people worldwide and has killed over 9,000. The confirmed death toll sits at 160 people in the U.S, according the Centers for Disease Control and Prevention. Only France, Spain, Iran, Italy and China have higher totals.

For the billions of people left in America and the rest of the world, COVID-19 has created a new normal. No one knows how long it’ll last. Not even public health experts.

Envision a world where many college students, the next leaders of the universe, are forced to accept not walking for graduation. The degrees will be mailed with no sentiment on the envelope.

As you can see, there was absolutely no need to recreate a world that is the reality presented to us. As a junior at Valdosta State, I feel deeply for those seniors here and around the world.

VSU President Dr. Richard Carvajal extended his apologies for the cancellation of Spring Commencement ceremonies. The University System of Georgia made the harsh decision and students braced themselves. In the best interest of students, USG choose health over success.

“Our top priority must be the health, safety, and wellbeing of all members of our VSU community, especially during these challenging times,” Dr. Carvajal said in a statement.

In Georgia, there are 197 confirmed COVID-19 cases. Of those cases, five are in Lowndes County. Many of VSU students are from Atlanta, which is home to Fulton County, Georgia’s largest county. Fulton County has the most cases for the virus in Georgia with 49.

Also, to twist the knife more, 43 percent of confirmed cases of COVID-19 are between the ages of 18-59. There is not much of a gap between sex either, with 46 percent in females and 54 percent in males.

In the beginning stages of the outbreak, there was a growing stigma that only the elderly can contract the disease. Only those with weakened immune systems were more likely to get the virus.

But, that does not mean it can’t happen.

The CDC has tried to emphasize the notion that nobody is virus-proof. Not even young adults.

The health of college students is more important that a degree because if you aren’t alive, the degree won’t matter. For VSU students and others, take this time to settle down with your loved ones.

Dr. Carvajal stated that there will be an alternative celebration for graduates coming soon. There are a variety of avenues this can go. A popular idea would be to move the Spring Commencement ceremonies to December, making it a two-day event with the Fall 2020 class.

Or, some students on several social media platforms have suggested hosting their own graduation ceremonies. A virtual graduation just seems like a punch to the gut.

It should be noted, VSU used the term cancelled, which means a planned event will not take place. Instead, it could’ve used postponed which would’ve bought the university time to re-schedule the ceremonies.

Students have spent money on cap and gowns. Parents have reserved hotel rooms.

It is all at an abrupt stop.

But hopefully, upcoming VSU graduates get what they deserve.