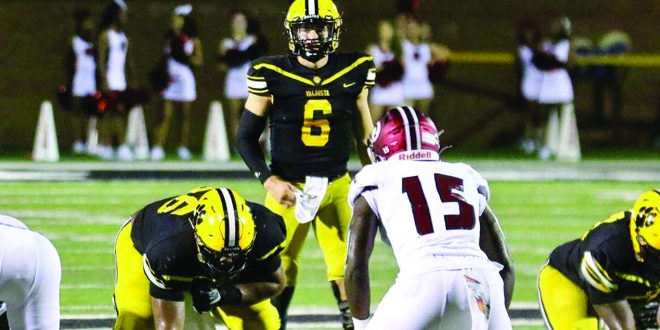 Valdosta High School quarterback and the No. 18-ranked recruit in the 2021 ESPN 300, Jake Garcia, was officially ruled ineligible to play in the state of Georgia by the Georgia High School Association on Sept. 29.

Garcia, a senior, transferred from Narbonne High School in California to play at VHS for his final season after it was announced that high school sports would not start in California until at least December due to the ongoing coronavirus pandemic. Garcia is one of the top-rated prospects in the country for the 2021 recruiting cycle and is currently committed to the University of Southern California.

Garcia moved to Valdosta with his father, Randy Garcia, while his mother, Yvonne, remained in California to continue her work as an administrative assistant.

In their ruling, the GHSA determined that Garcia and his father were not officially Georgia residents, which is a requirement for any student athlete planning to play at the high school level in Georgia. According to the GHSA rules, a transfer student can only be immediately eligible if the “student moved simultaneously with the entire parental unit or persons he/she resided with at the former school, and the student and parent(s) or persons residing with the student live in the service area of the new school.”

According to the GHSA, Garcia gained eligibilty to transfer to VHS using false information and a student must make a “bona fide move,” meaning he must move simultaneously with the enitre parental unit.

Both VHS and Garcia’s family plan to appeal the decision, though it is unknown how likely the decision is to be overturned.

As for Garcia, himself, he did not play in the Wildcats’ last two games due to a hamstring injury that he suffered in the season opener against Warner Robins High School, a 28-25 win. It is still undetermined if the Wildcats will have to forfeit that game due to Garcia’s ineligibility.

A concerned supporter named Justin Russell has started a petition on Change.org to help in the fight for Garcia’s eligibility. The petition currently has over 10,000 signatures.

Garcia has publicly shared the petition on his social media. Other highly touted recruits across the country have also showed their support for the star quarterback.

If the decision is upheld, Garcia will have likely played the last game of his high school career as he plans to enroll at USC in January.

Both VHS officials and VHS head coach Rush Propst have declined to comment on the situation.