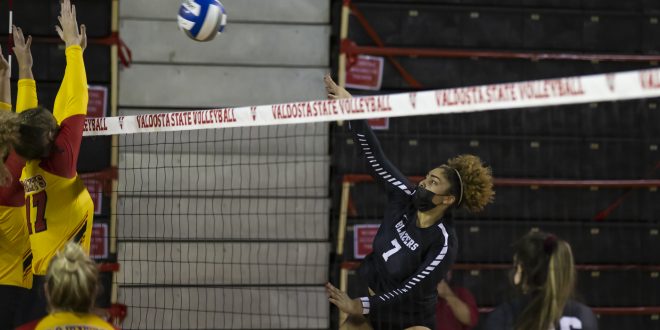 The Blazer Volleyball team lost their first game of the season Tuesday, February 16 against Flagler College.

The first point of the Blazer season came from freshman right-side hitter Caitlin Warnshuis with the help of sophomore setter Katie Demo.

The first set was a close call for the Blazers and the Saints as the two teams were striving for the lead in the first few points, but the Blazers gained an early lead after three consecutive points that pulled them ahead 6-4.

Flagler fought hard and matched the Blazers score, but sophomore right-side hitter Keelyn Williams refused to go down without a fight and gave the Blazers the lead once more.

Flagler was persistent in their attacks, however, and the set ended with a close score of 22-25 as the Saints took the win.

The second and third sets were rough for VSU fans as Flagler took an early lead in each set and the Blazers struggled to recover.

Despite incredible efforts from senior setter Tammy Rayes Perez and junior outside hitter Jessie Mooney, the Blazers lost 25-16 in the second set and 25-18 in the third set.

Despite the loss, head coach Kaleigh Zoucha felt more confident than ever about the upcoming game against the Saints on Friday, February 19.

“It’s a unique thing for us to be able to prepare for a team that we just played,” coach Zoucha said. “So, there are definitely some adjustments that we are going to make to match up a little bit differently.”

This makes the fifth consecutive loss for the Blazers against Flagler since their first matchup in 2011.

The Blazers ended their second game with 50 kills and just 16 errors with a percentage of .274, which shows significant improvement from their first game.

A new adjustment the team had to make before each game was a mask requirement both on and off the court.

“It is definitely something we have had to get used to,” Mooney said. “It’s been hard, but honestly we are all trying to do our part. We are really sticking to it and keeping each other accountable.”

The Blazers next match up is Saturday, March 6, 2021 at 10 a.m. and 3 p.m. as they play Montevallo and Auburn Montgomery in a doubleheader at home.

Previous VSU Withdrawal Policy is not a free pass
Next People Poll: How do you deal with test anxiety?