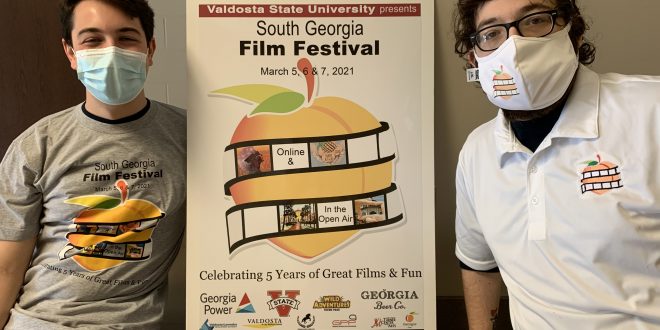 The South Georgia film festival has been hosted by VSU since it first began five years ago and will take place on campus this year as well.

Though the title suggests exclusivity, the festival is open to filmmakers across the world and both high school and college students are encouraged to participate.

The film festival is showing 109 films this year as filmmakers in Georgia, Florida, and even international artists all submitted their best films to represent their talents.

The festival is a three-day event beginning Friday, March 5 at 7:30 p.m. through Sunday, March 7 and includes four live open-air screenings and a live recording of the AFC Indie Filmmaking podcast with Chuck Thomas.

“Saturday, Chuck Thomas will be interviewing about a half-dozen film makers who are going to able to be here,” Jason Brown, the festival director, said. “That will be an opportunity for the students who work in the festival to meet working filmmakers and for other students and the community to listen to them.”

The festival’s usual structure has been changed to include a completely virtual access to all the films as well as the panels. The films will be available online on Monday, March 1 until Friday, March 12.

“We were one of the last festivals that were in person and spent the last year watching what other festivals had done, and a lot of what they did was went virtual,” Brown said.

Students will be able to purchase an online pass for $20 that allows the student to access all the films, panels and all the in-person films. A student screening pass is also available that allows access to three virtual tickets and all panels and in person films for free with a student ID.

All open-air screenings will be located on the VSU Fine Arts Lawn and social distancing will be in place as well as masks available.

All passes can be purchased online on the South Georgia film festival website.

Previous People Poll: How do you feel about the first Wellness Day?
Next Enactus blazes with café reopening