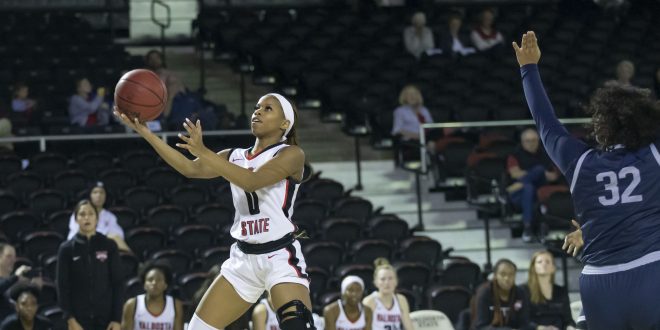 The No. 15 Lady Blazers beat Palm Beach Atlantic 72-40 on Nov. 12, following that up with a 65-58 victory against Benedict on Nov. 13 in the South Regional Crossover held at the Complex.

The Lady Blazers outscored PBA 22-4 in the first quarter. VSU carried that momentum into the second quarter, finishing the first half with a 31-14 lead.

VSU, once again, outscored PBA 41-26 during the final two quarters. The Lady Blazers shot 11-24 overall and 4-12 from the three-point range in the second half.

“I feel like, yesterday, we had a lot of energy, and we knew today we would have to have a lot of energy to get this dub,” Francis said. “Defensively, we knew that we had to communicate a lot.”

VSU knew that Benedict’s offense was aiming to drive the ball to the basket prior to the game.

“A big thing we knew they were going to have is their post, and we knew we had to take that away from them,” Francis said.

At the end of the second half, VSU trailed by nine points.

During the game, the score was tied five times and there were two lead changes.

“I just feel like they were leaving us open a lot at the three, doubling down,” Francis said. “And once we started hitting, they stopped that.”

All through the third quarter, the score was neck and neck until the end of the quarter when Francis scored in the paint and sophomore guard Kendall Bollmer scored a three-point shot.

According to Francis, the Lady Blazers kept their composure even as the game got tight, and this contributed to their win.

“Knowing it’s a close game, we just needed to calm down, relax, run our sets and execute.” Francis said.