Home / Entertainment / The Wordle whim takes over the Internet 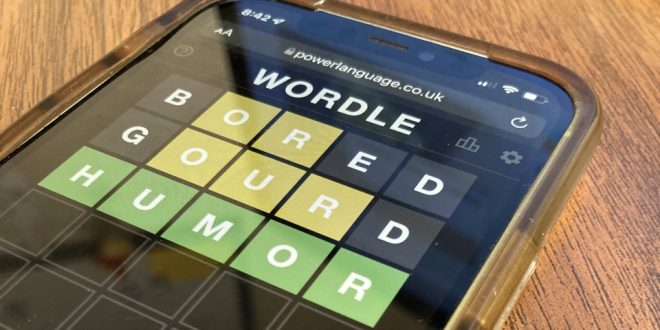 The Wordle whim takes over the Internet

Throughout the short-lived history of the iPhone, games have been one of the things to stay consistently popular. Be it Brick Breaker, Candy Crush or Flappy Bird, they always stay just a few clicks away. However, one new game has a hold of the world for its fifteen minutes of fame.

Wordle is a new puzzle game where the objective is to guess five letter words in six tries. The block will light up yellow if the letter is in the word but not in the right place and green if it is in the correct space.

The premise is simple, but the letters can be tricky enough where it still provides a stimulating enough gameplay to keep its players interested.

In addition, it also has a separate game mode where players must guess words in the same way, but each word links to a “secret word” associated with the one before.

The game itself is inspired by the idea of crossword puzzles, fill-in-the-blank games and board or television games such as Chain Reaction or Scrabble.

Many students on campus enjoy the game, saying it provides a distraction from the world and helps make a boring line or bus ride more enjoyable.

Other students are not as much of a fan. For some, it can be challenging or confusing to the point of not being fun. For others, it can be underwhelming and cause more boredom than it cures.

Maeghan McIe, a junior biology major, said “It’s just a bunch of colored blocks, and I know they have a meaning, but how can you figure out a single word from colored blocks? And how do you know you guessed the right ones?”

Regardless of the mixed reactions, Wordle has continued to spread like wildfire across the Internet, and across campus here at VSU.

How long it will remain popular until it gets overthrown by another game with a similar premise is unknown, but this is known for certain: while Wordle remains in the spotlight, it will remain well-loved by the student body.

Previous Editorial: Parents should not determine a child’s education
Next Demolition of Converse Begins after Five-Year Vacancy