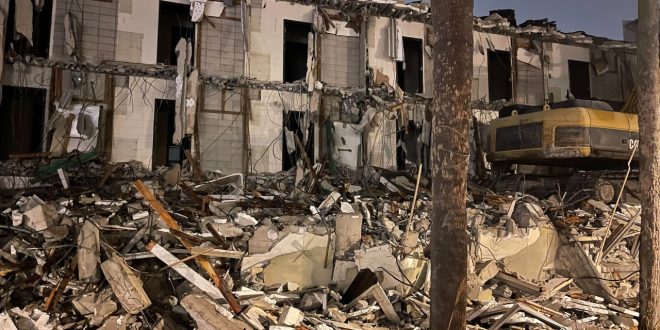 The demolition of Converse Hall Annex has begun after a five-year vacancy.

It was rumored that there was asbestos founded in the building; however, this is untrue.

Alan Sanderson, associate director for facilities planning, said this space was selected for demolition due to the structural system not allowing for interior space reconfiguration and another use.

“This area will become a landscaped green space,” Sanderson said.

This project is expected to be completed by April with green space taking place of the building.

The original Converse Hall was destroyed by a fire in 1978, and the Annex was one of the two wings built in 1981.

“The north wing was demolished in 2010 to make way for the new Converse Hall academic building, which houses the Department of Human Services, Department of Psychological Science, graduate school and more,” Sanderson said.

Debris is currently has been being cleared away by construction crews and the demolition continues with multiple hands-on deck.

Parking and transportation sent an email to the students and faculty on Feb. 3 to warn students of parking closure beyond Hopper date beginning Saturday, Feb. 5. There was also short term closure from Oak Street to the Hopper/Union loop on Sunday, Feb. 6.

Parking was reopened on Monday, Feb. 7.

According to Sanderson, other residence halls set for major restroom renovations are Brown, Lowndes and Patterson.

Previous The Wordle whim takes over the Internet
Next Photos: The demolition of Converse Hall